On the afternoon of June 21, 2018, the law school of Beijing Normal University welcomes the first session of the "International Academic Masters Campus Tour" seminars, with the theme of "Hand in hand towards a common world of law - the future of law under the background of globalization”. This seminar invited guest speaker is Mireille Delmas-Marty, French famous jurist, Academician of the French Humanities School. Her academic research scope is extremely broad, academic influence has spread all over the world, her books have been translated into many languages, and the Chinese students she has mentored are spread across numerous universities, her students kindly call her "professor Dai". Professor Dai has been a deputy chairman of the international criminal jurisprudence association for a long time, as editor of the journal of comparative criminal law and criminal science, and also the director of International Economic Law Association, foreign academician of the Royal Academy of Sciences in Belgium, as well as won the honorary doctor's degree in a number of world-famous institutions, she won the French order of honor , France's national medal of the knights of honor, the French national outstanding contribution to the grand cross medal of honor and the grand cross of national award of honor.

At 14:00 p.m., In the auditorium of 1822 Gao Mingxuan conference hall，the main building of the Beijing Normal University has been filled with the crowds, and the atmosphere was warm. The spectacular giant poster hanging out of the hall, teachers and students of law school and invited guests from several universities are expecting this important foreign scholar to our law school, to open a new academic feast. 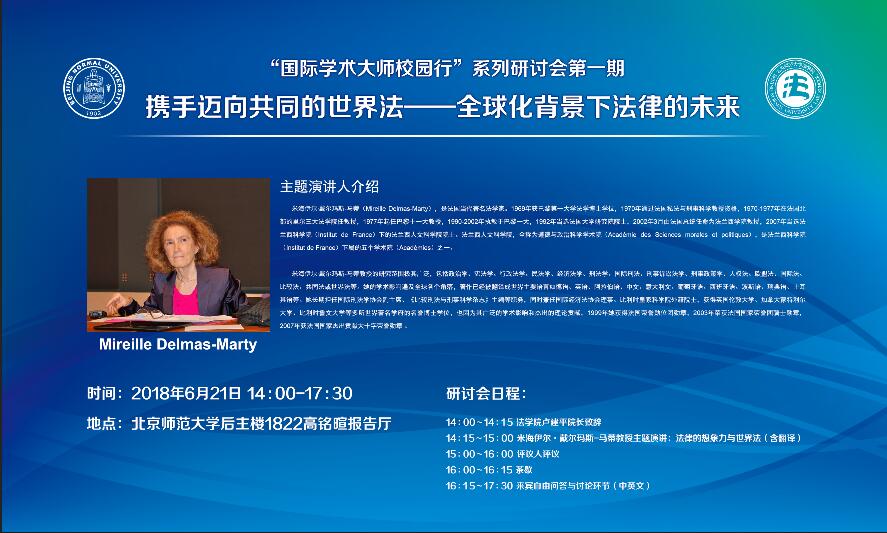 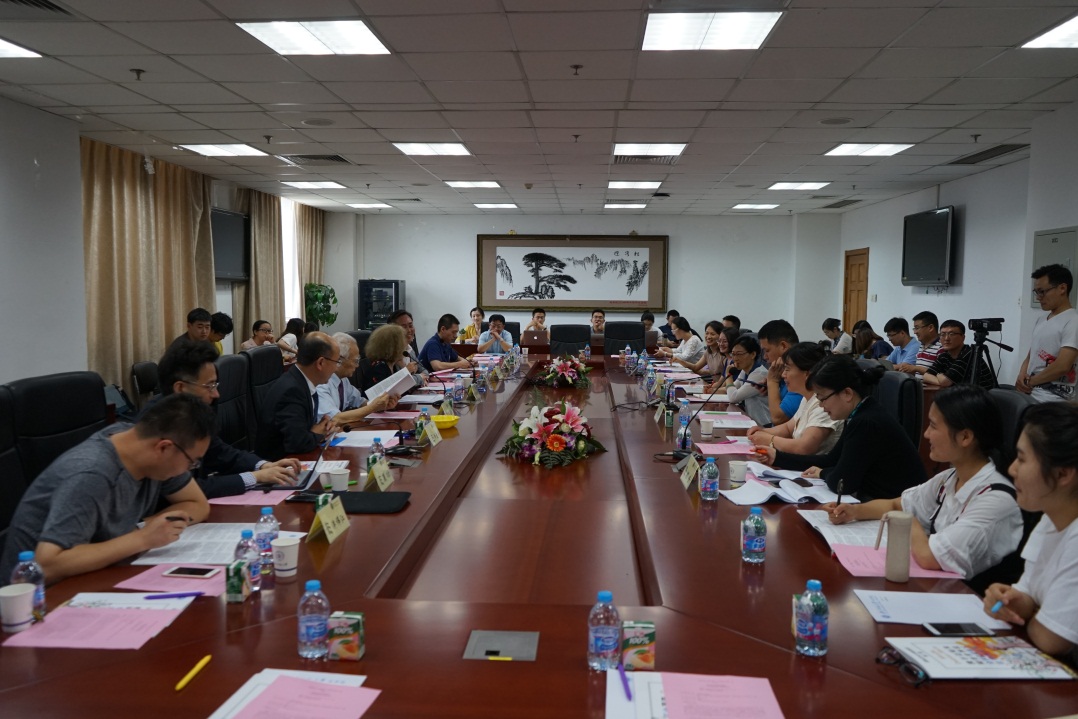 The seminar was officially opened under the chairmanship of President Lu Jianping. On behalf of teachers and students, President Lu extended a warm welcome and appreciation to professor Dai and gave a speech for the conference. 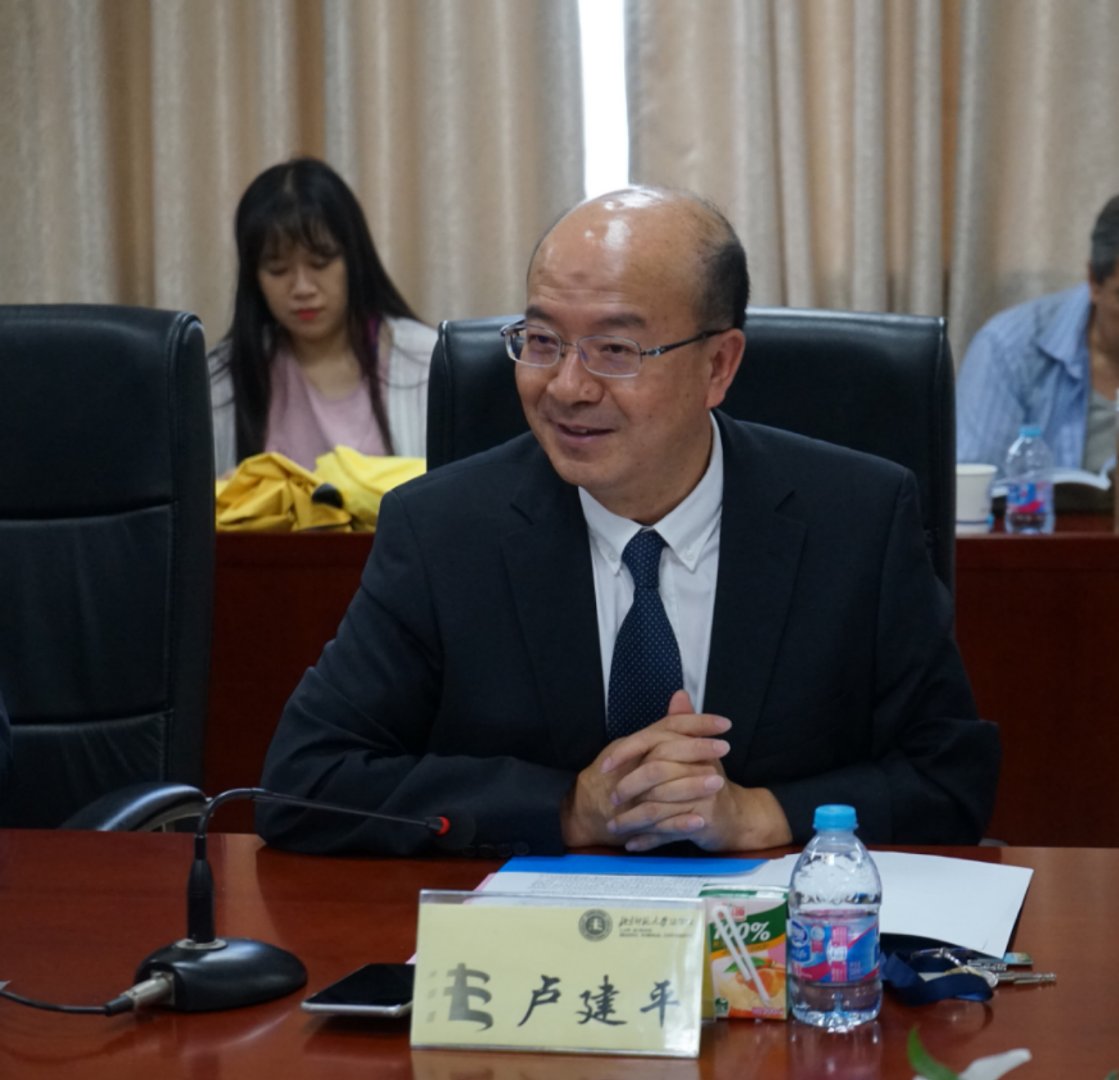 Then, professor Dai gave a keynote speech on "The imagination of law and the law of the world" and her thoughts and researches on the new legal order in the context of globalization. she says that globalization has developed to a tipping point, which requires a legal system on a global level. She stressed by establishing the ordering of pluralistic world, depend on each other's differences can be converted to translate differences into mutually dependent stable states towards peace. Professor Dai also pointed out that the reconstruction of power cannot leave the law, and it needs to try to combine the governance mode with the rule of law, and put the world order between the idea and the rule. Professor Dai highly praised the important value judgment of the "community of Shared future for mankind" that has been written into the constitutional amendment ，and stressed that the establishment of a common world law is a concrete attempt to promote the building of a "community of Shared future for mankind", expecting China to make positive contributions to the common world law. 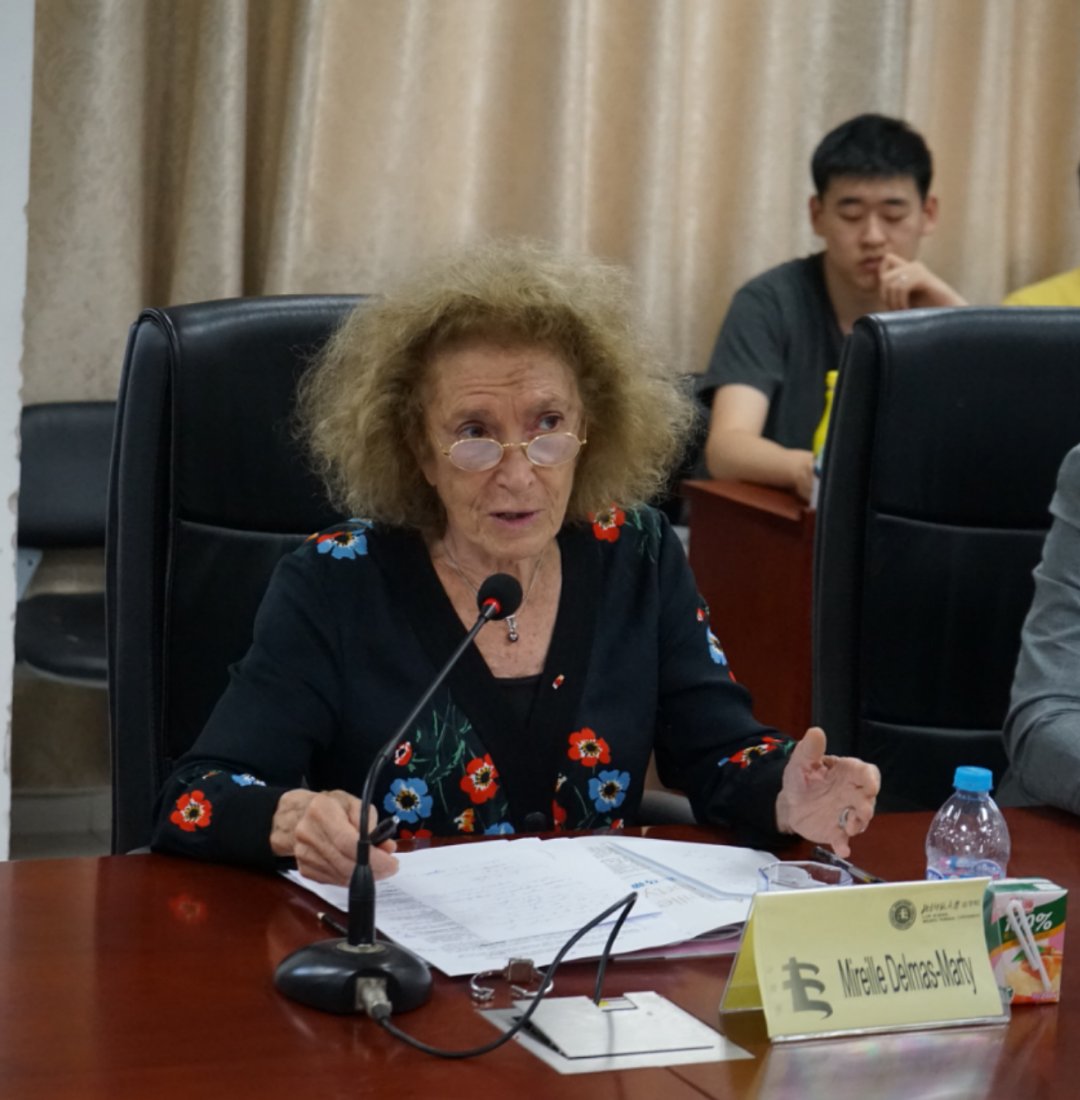 Professor Gao Mingxuan gave comments on professor Dai's excellent speech. He fully affirmed professor Dai's amazing range of knowledge and academic cultivation, and highly appreciated professor Dai's insights and theoretical analysis with great practical significance on the globalization of law. At the same time, professor Gao also pointed out that from the current dependence among countries in the world, the "community of shared future for mankind" has pointed out the direction for countries to reach consensus and commented on some anti-globalization phenomena that's happening right now. 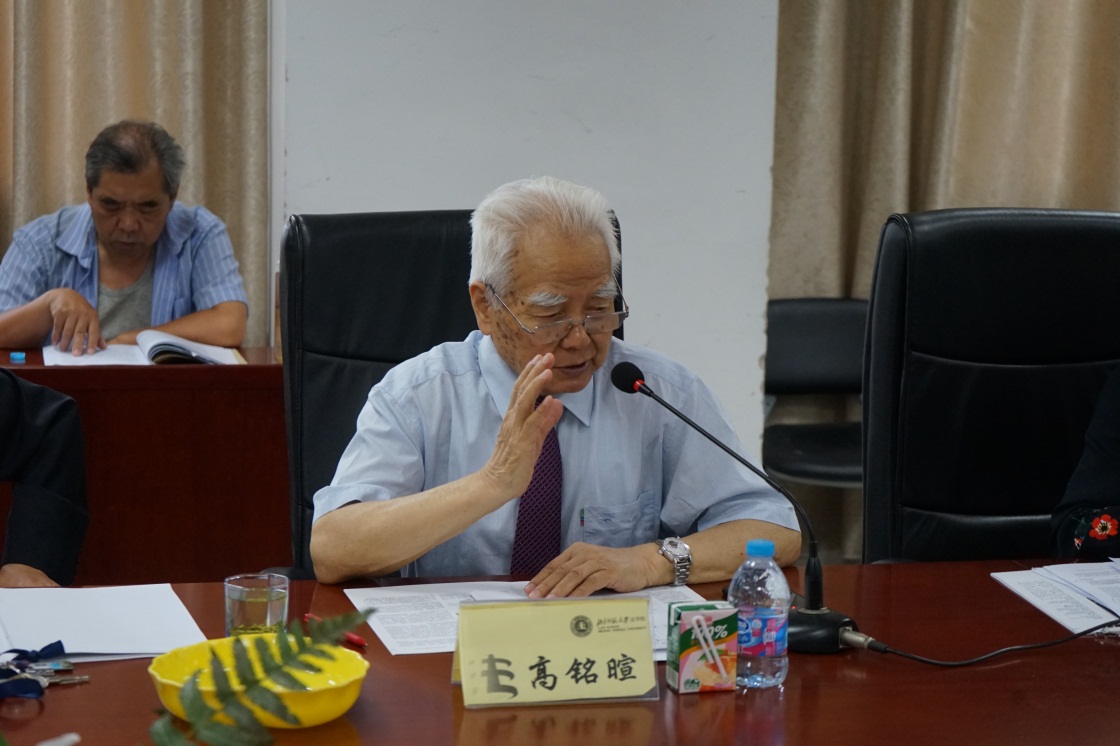 Subsequently, professor Xia Yang, director of the center for the teaching and research of basic theory of law school, also gave a comment on this lecture. Professor Xia first expressed his admiration for the height, breadth and depth of professor Dai's academic research, affirmed the unique perspective and method of French scholars' research, and emphasized the importance of French academic thoughts in the International academic community. Based on his concern for the reality and thinking about the future of law, professor Xia Yang successively proposed "what is our imagination about law?" ", " how can knowledge be balanced with will and power?" ", "how do we properly deal with the globalization of law?" and so on. 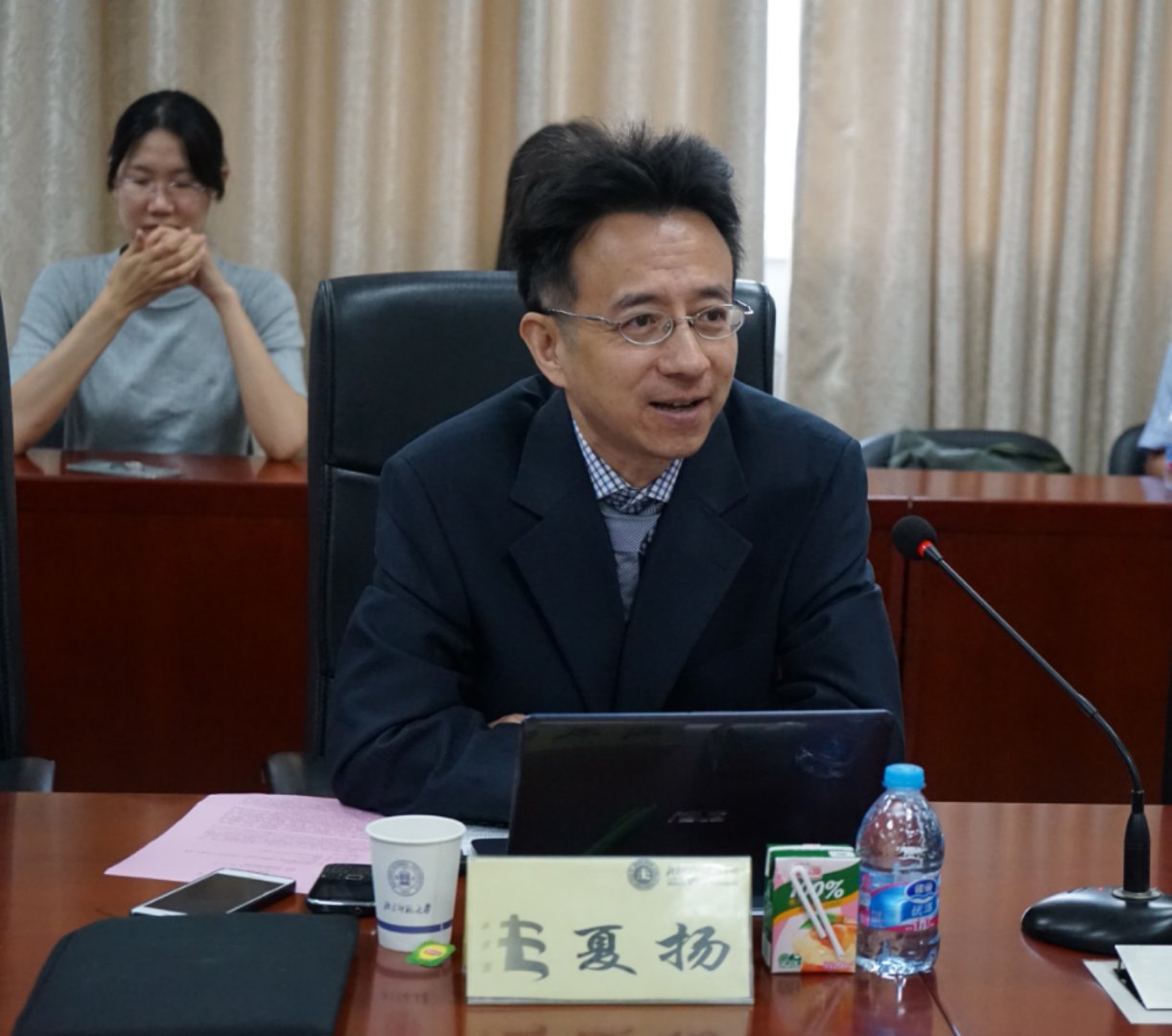 The following discussion was lively. Scholars and professor Dai held extensive and deep discussion, under the three languages of China, English and France, the exchange and collision of ideas showed the wise and elegant demeanor of the scholars at the conference. Dr. Zhu Mingzhe from China University of Political Science and Law and professor Dai discussed a new round of four kinds of relationship with the world in the international law field. Professor Lu Nan of Tsinghua university has argued that the "globalization in which the technological language is the prospect of globalization rather than the globalization of humanism". Professor Pan Weijiang from Beijing University of Aeronautics and Astronautics discussed the principle of "conformity" and "proportionality principle" in German law with professor Dai. 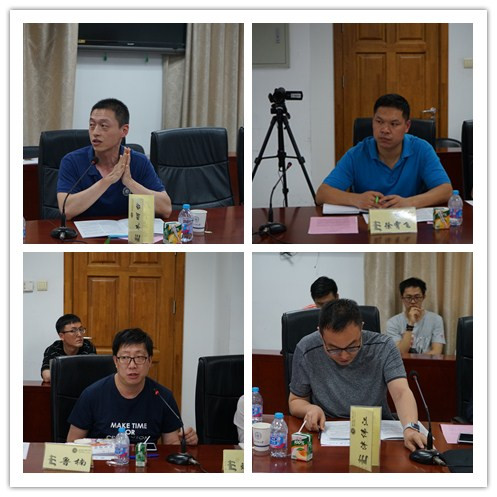 Teachers and students of the law school took an active part in the discussion. For example, one of the students has asked questions about the coordination between refugees in the world and humanitarian issues, in the answer, professor Dai has repeated the "core values of France" put forward by President Lu Jianping, the law should give to everyone, the right to be treated well, and that everyone has a right to be rejected as an enemy, and that is the exact representation of freedom, equality, and fraternity. 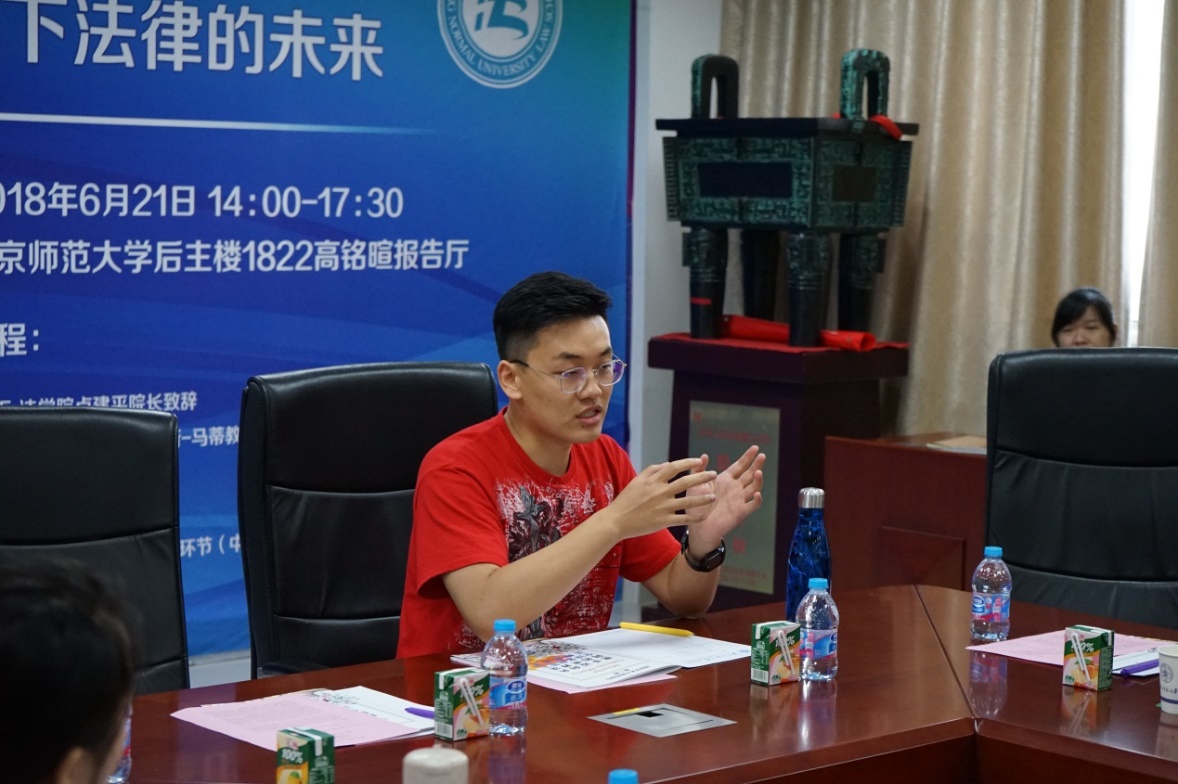 At the end of the seminar, dean Lu Jianping, on behalf of the law school, respects again for professor Dai, thanks her to overcome difficulties to sharing academic ideas to us. To provide precious learning opportunities for scholars and communication between the two countries. At this point, the seminar ended with gratitude to professor Dai and in the warm applause.

Professor Mireille Delmas-Marty 's lectures and published works in French have been translated into Chinese by professor Li Bin and professor Liu Wenling, and will be published recently in China. 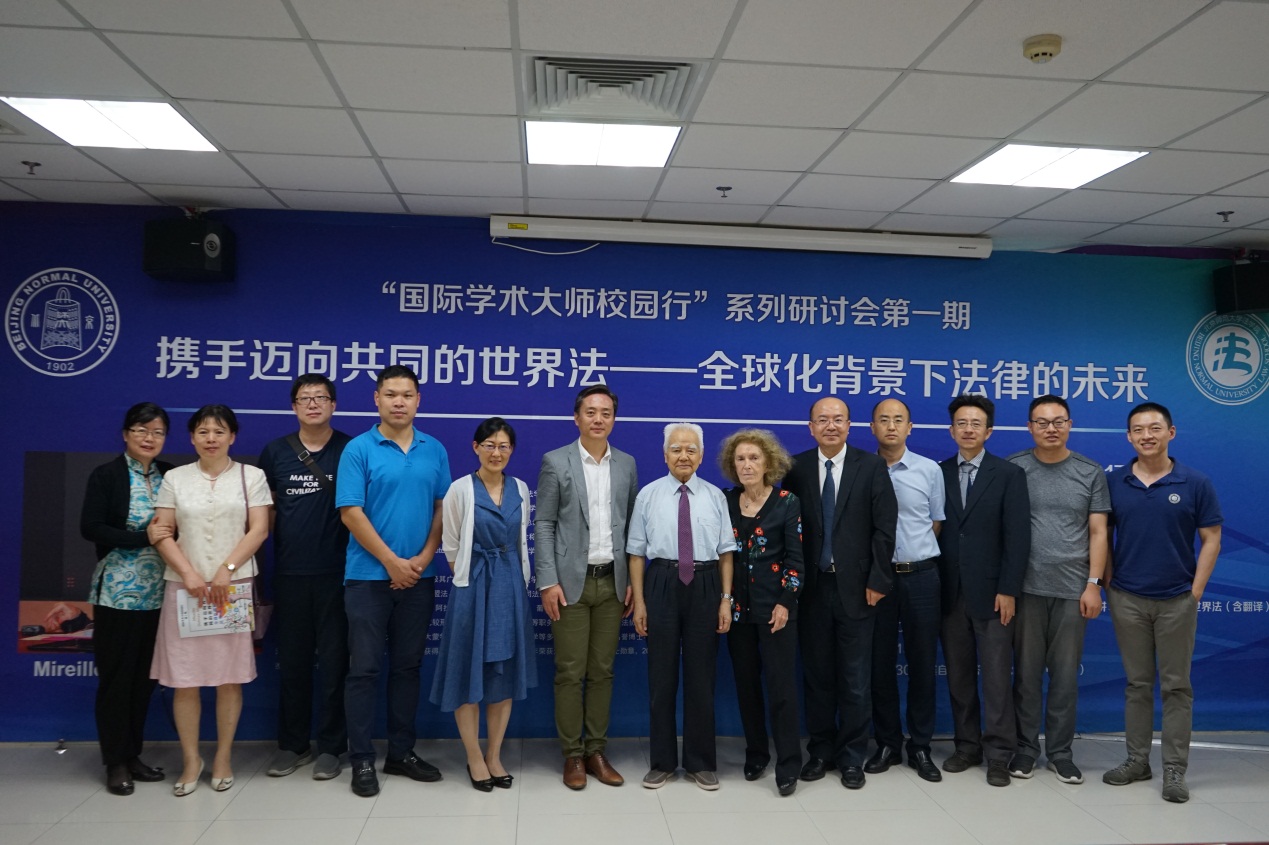