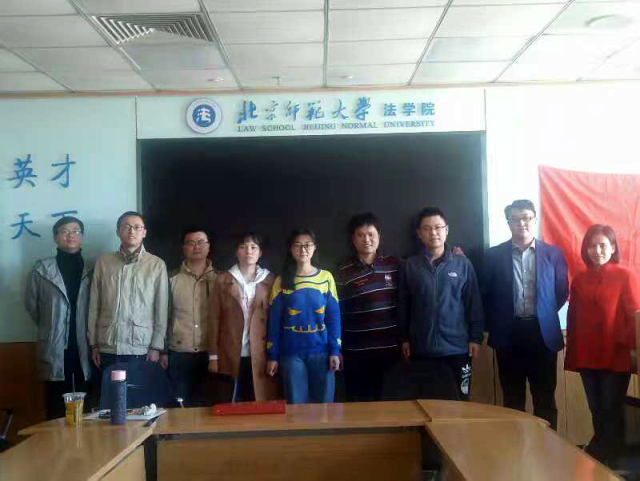 First: All rise and sing the national anthem.

LI Zhaoquan: Role of Thinking and Mode of Rule of Law in Exercising Party Self-governance Fully and Rigorously (20min)DIAO Shun: Talk about Idea of Rule of Law from Packaging Decoration Case of Guangzhou Pharmaceuticals Corporation and JDB (20min)

JIANG Zongyan points out that rule of law is one of the important contents of socialist core value. Today, our class will hold a class meeting themed in “I and Socialist Core Value”, welcome to share your opinions. Next, JIANG Zongyan announces the meeting agenda, and the meeting formally starts.

LI Zhaoquan gives speech: Role of Thinking and Mode of Rule of Law in Exercising Party Self-governance Fully and Rigorously

DIAO Shun considers that the conflict and dispute caused by combination of different commercial logos or labors are frequent, and existing Chinese laws do not have effective guide for this, which leads to the dilemma of applicable law in packaging decoration case of Guangzhou Pharmaceuticals Corporation and JDB. Current protection path or intends to unilaterally protect right of specific entity and causes interest unbalance, or submits right from commercial logo to the entity to co-own, which is not favorable for subsequent dynamic flow of commercial logo. To solve these problems, under the background of compiling civil code, it is necessary to introduce accretion rule of traditional real right to property law through mixed type legislation mode, abide by random legal code prior to the stipulation of relevant party, judge whether the accretion of commercial logo is formed according to the main standard of “conversion test” and auxiliary standard of “value differential test”, then obtain the exclusive right of commercial logo according to the party with greater contribution, and make up relevant input and income of the other party.

LI Hao agrees with DIAO Shun, and considers it righteous to strengthen research in making intellectual property right law a civil law since the requirement on compiling civil code at the Fourth Plenary Session of the 18th Central Committee of the Chinese Communist Party. Existing data shows that the accretion protection path of commercial logo will not have negative influence on the accretion rule, instead, it cannot only provide a new solving idea for similar dispute of packaging case of WLJ and JDB, but also is applicable in solving the dispute of combination of other commercial logo.

Discussion from other students:

GAO Mou shares his opinion in the competition of Daoxiang Village trademark in the south and north, and considers that enterprise should not develop the thinking of expelling or restricting competitor from entering relevant market by litigation, instead of abusing weapon of law, they should win by quality and establish brand thinking through advertising.

GU Li talks about the idea of rule of law from the latest AI hot spot, and considers thinking of rule of law should be established also for the development of AI industry. For example, Patent Law is necessary to protect the independent invention result of AI, through comparing relationship of employer and employee of post invention, endows AI with the position of inventor and grants patent right to AI user.

Finally, DIAO Shun says that it is meaningful to hold “I and Socialist Core Value” Theme Class Meeting, which can make everybody further recognize socialist core value. He expects to discuss relevant topic with classmates next time.