On June 24, 2018, the Law School of Beijing Normal University bid farewell to her dear "children" once again. 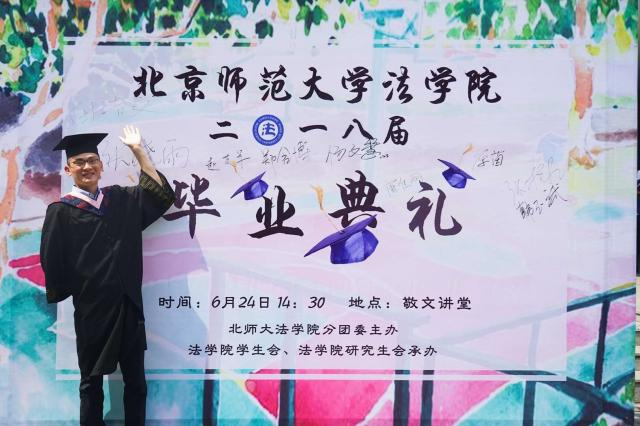 At 2: 30 p.m., students gathered at the Jingwen Lecture Hall. Graduates of 2018, Law School teachers and parents of graduates signed on and took photos in front of the publicity board with colored drawing before entering the lecture hall. On the big screen in the lecture hall was a video carefully prepared by the school for graduates. In the video, the teacher's blessing and the graduates' own feelings won cheers and applause, as well as reminded the graduates of the four beautiful years of the university. 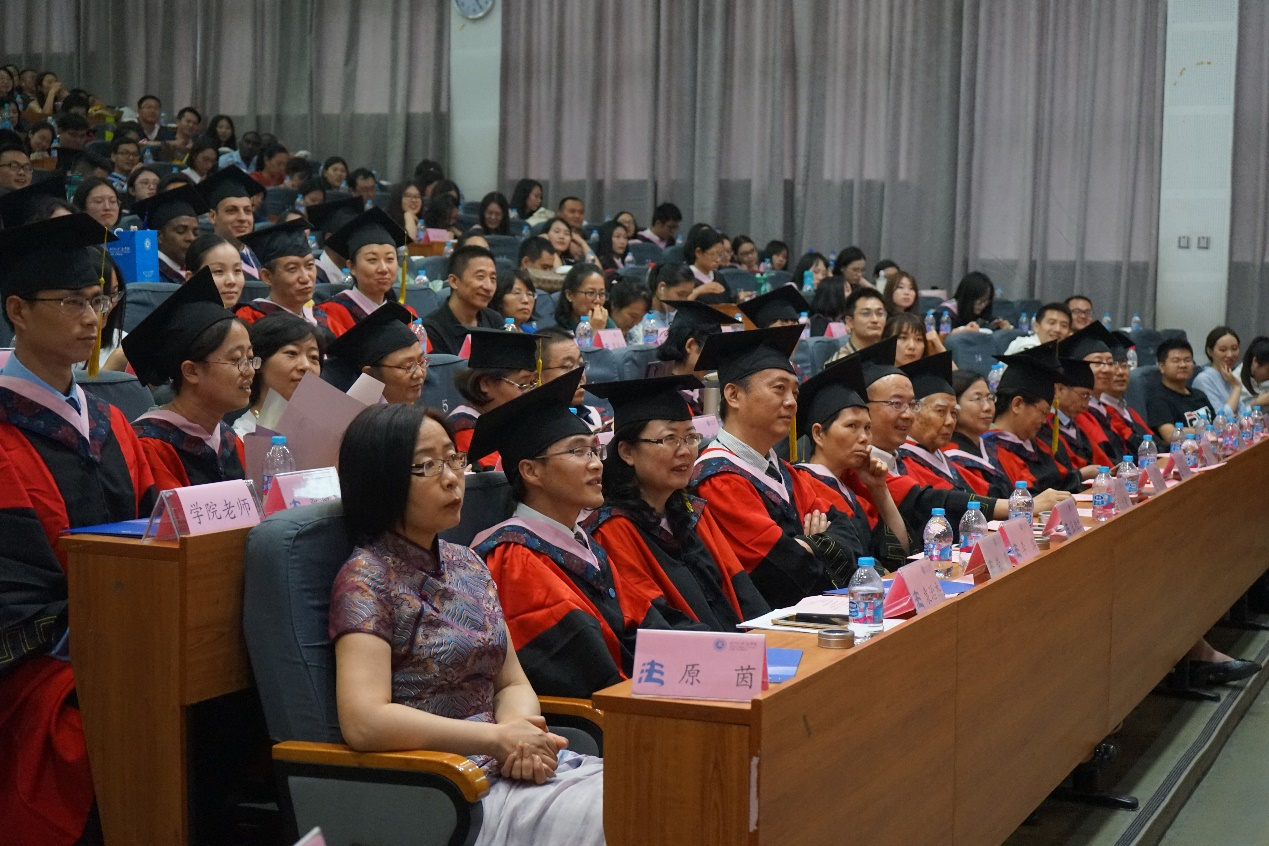 In the 1st event of the conference, all stood up and sang the national anthem.

With the solemn national anthem, the 2018 graduation ceremony of Beijing Normal University Law School was beginning. 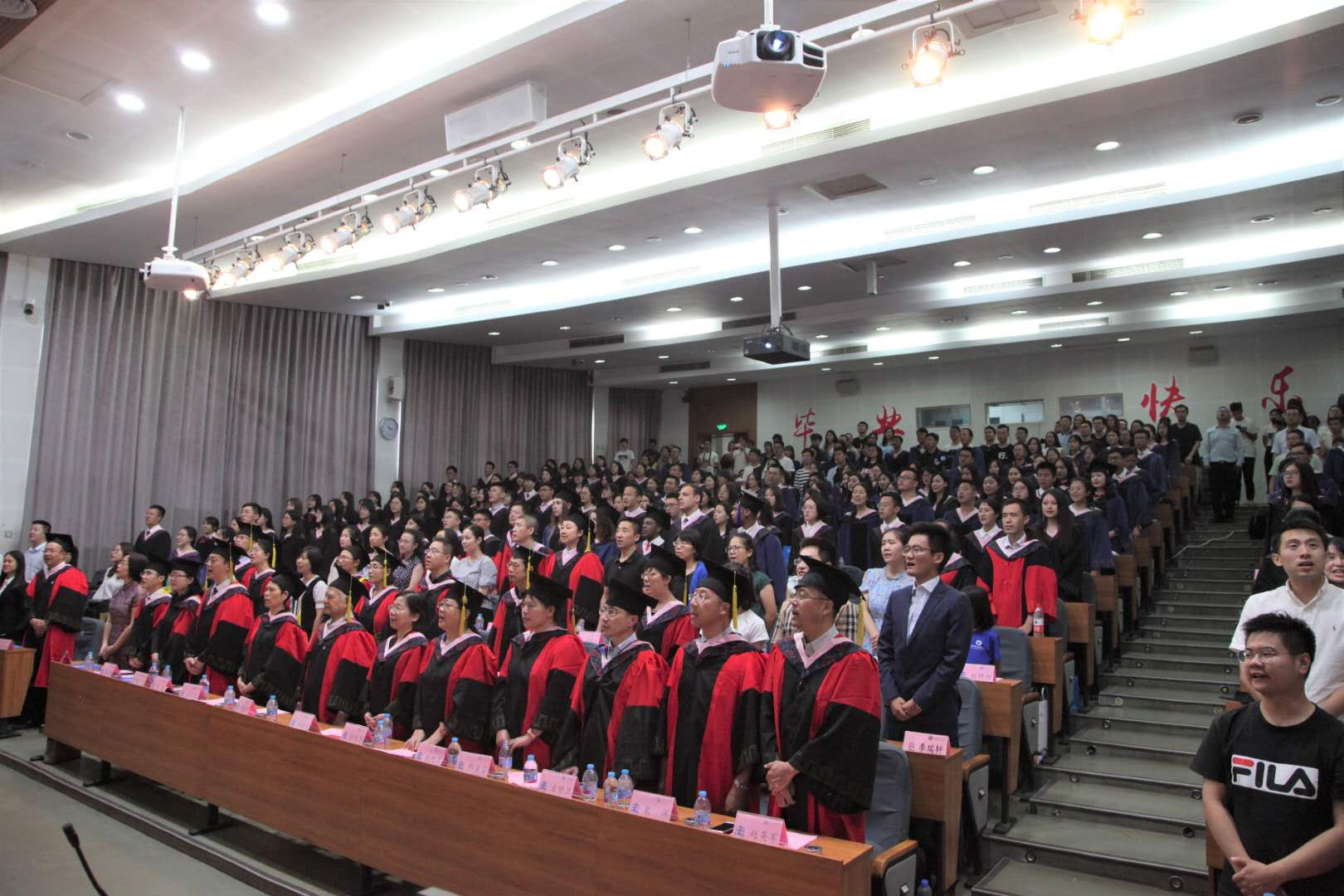 The 2nd event of the conference was to introduce the guests.

Professor LIANG Yingxiu served as the host of this ceremony. 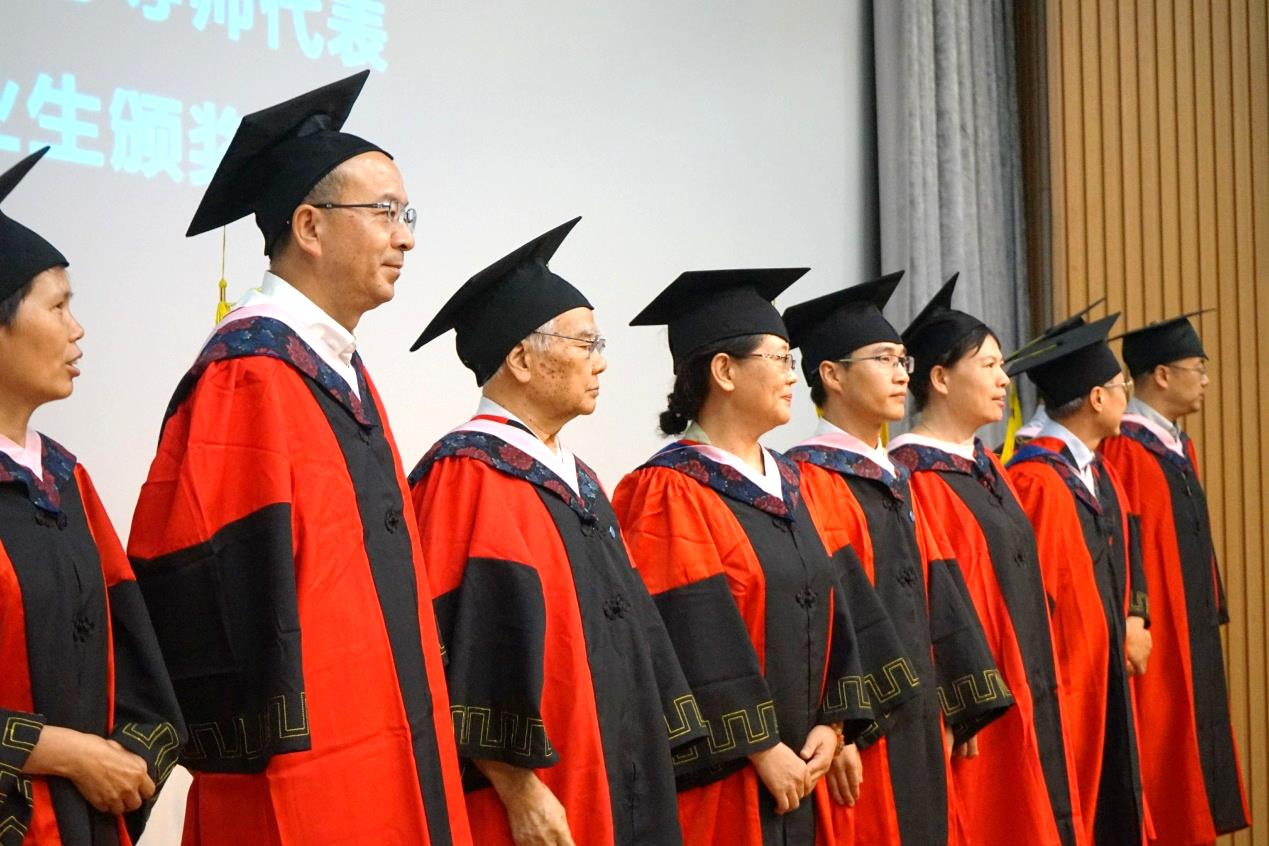 In the 3rd event of the conference, Vice Dean YUAN Zhijie read out the winner list of undergraduates for outstanding graduation theses. 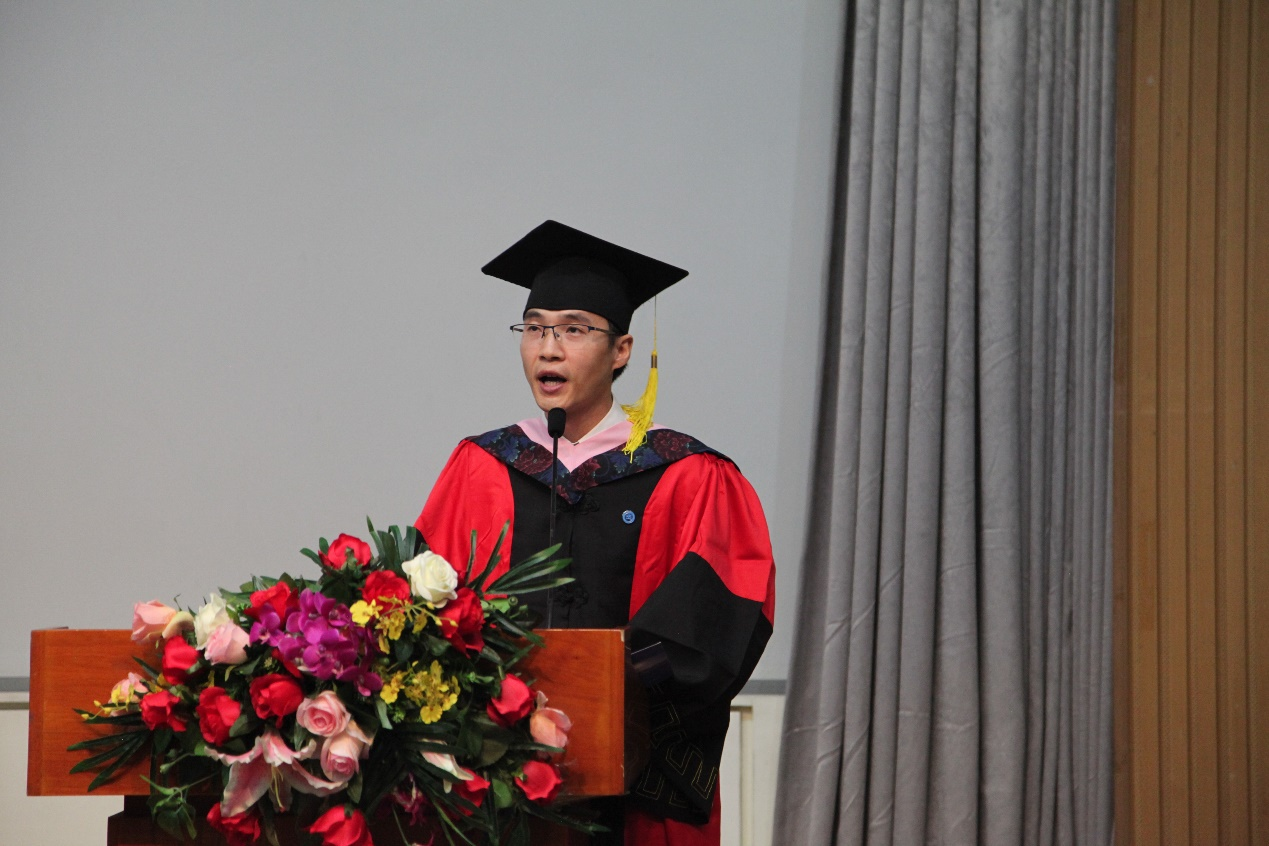 In the 4th event of the conference, Vice Dean CHAI Rong read out the list of winners for outstanding academic master's/doctor's theses. 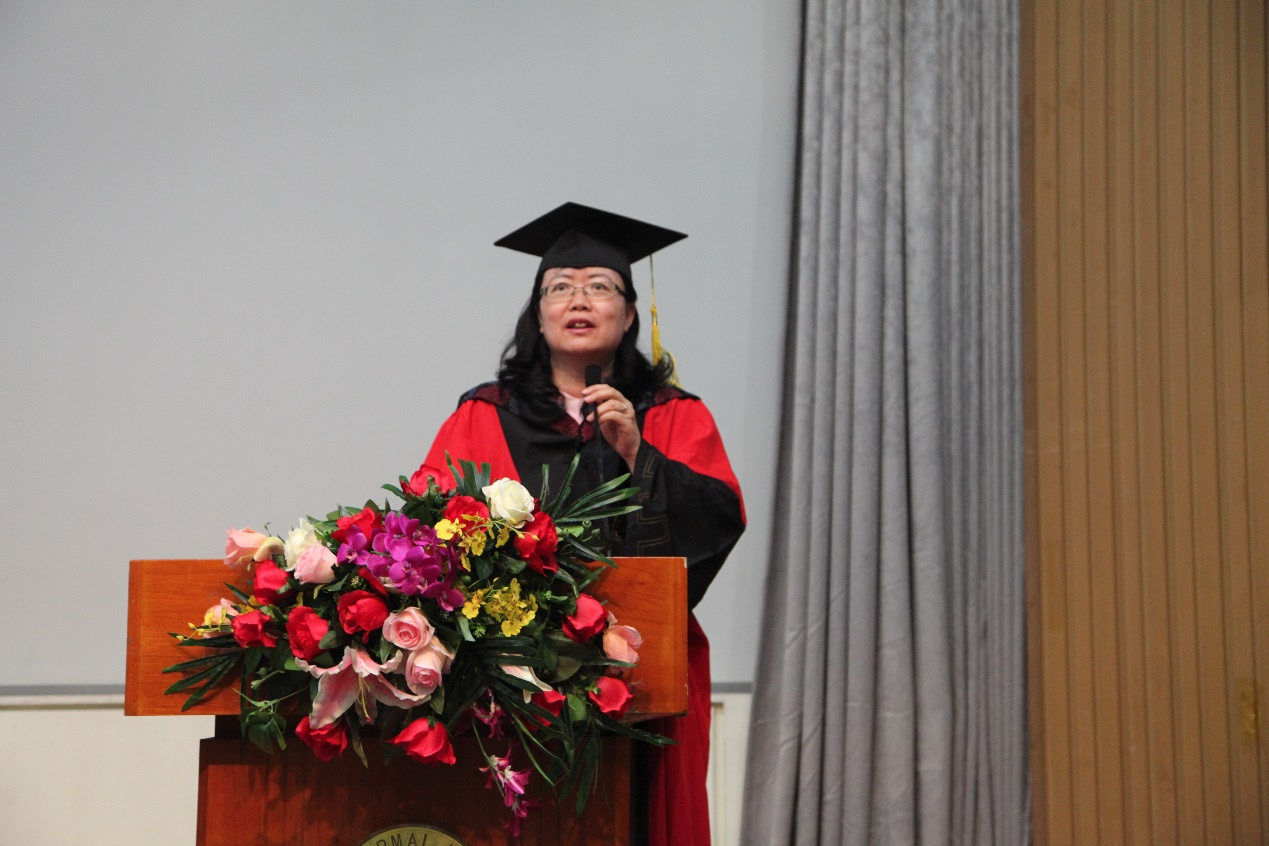 In the 5th event of the conference, Vice Dean LI Bin read out the list of winners for outstanding professional master's/doctor's theses. 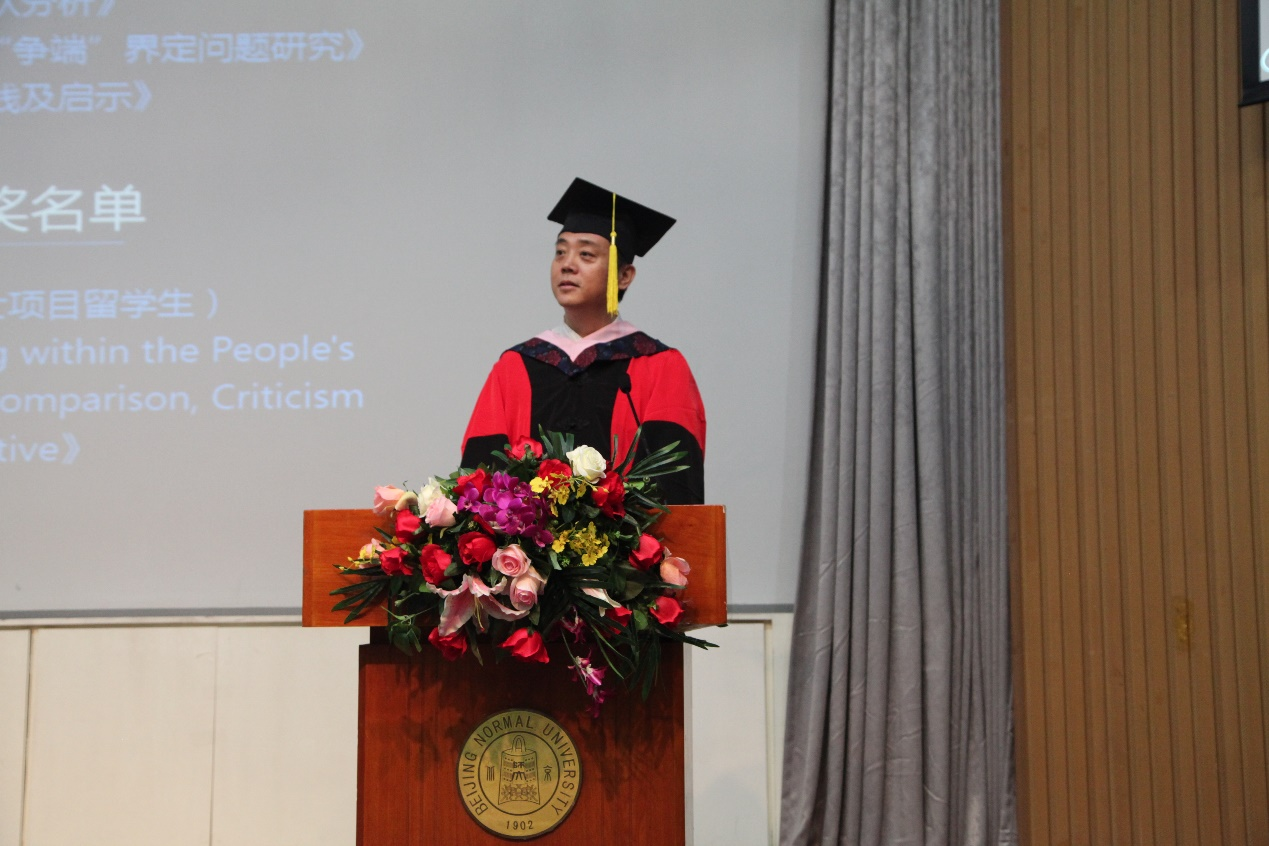 In the 6th event of the conference, Vice Secretary YUAN Yin read out the winner list of outstanding graduates. 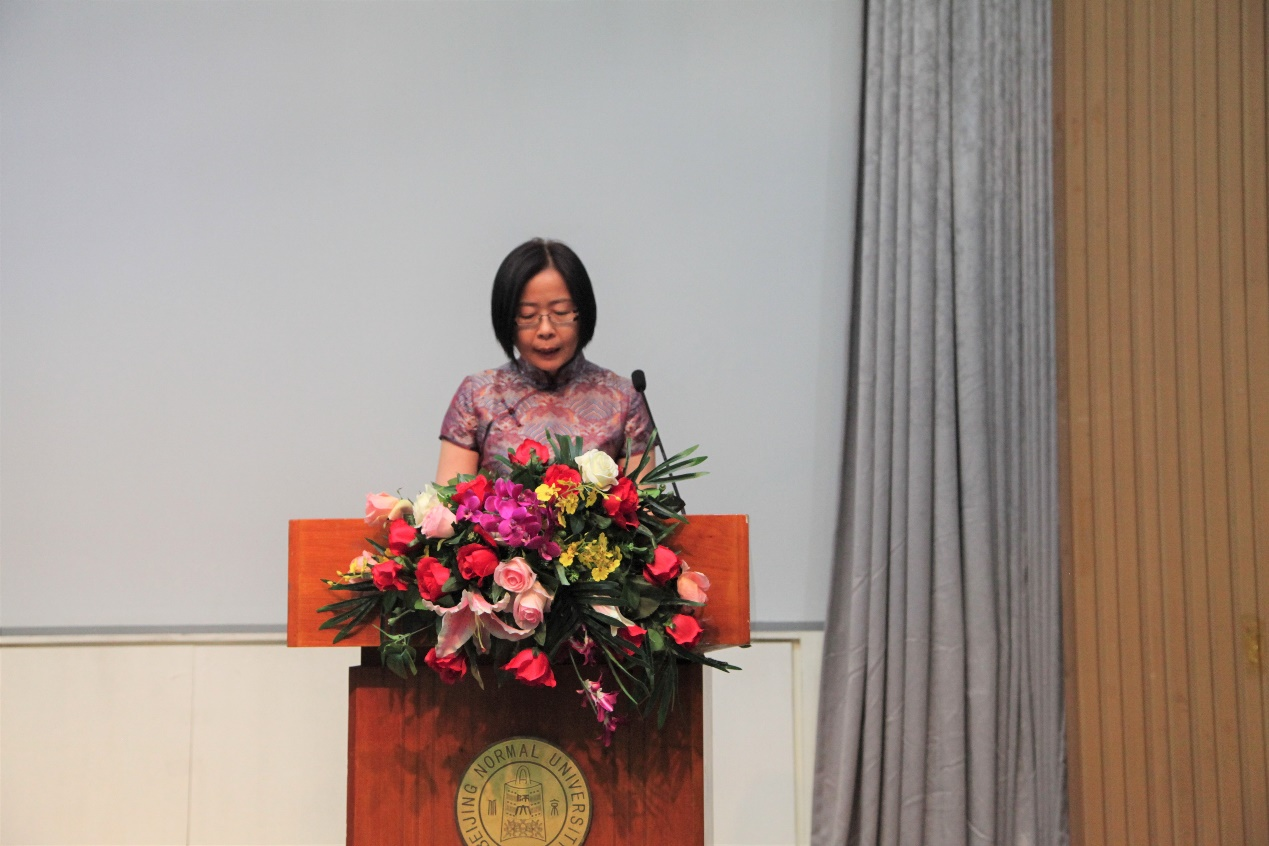 In the 7th event of the conference, representatives of the school leaders and instructors presented awards to the outstanding graduates. 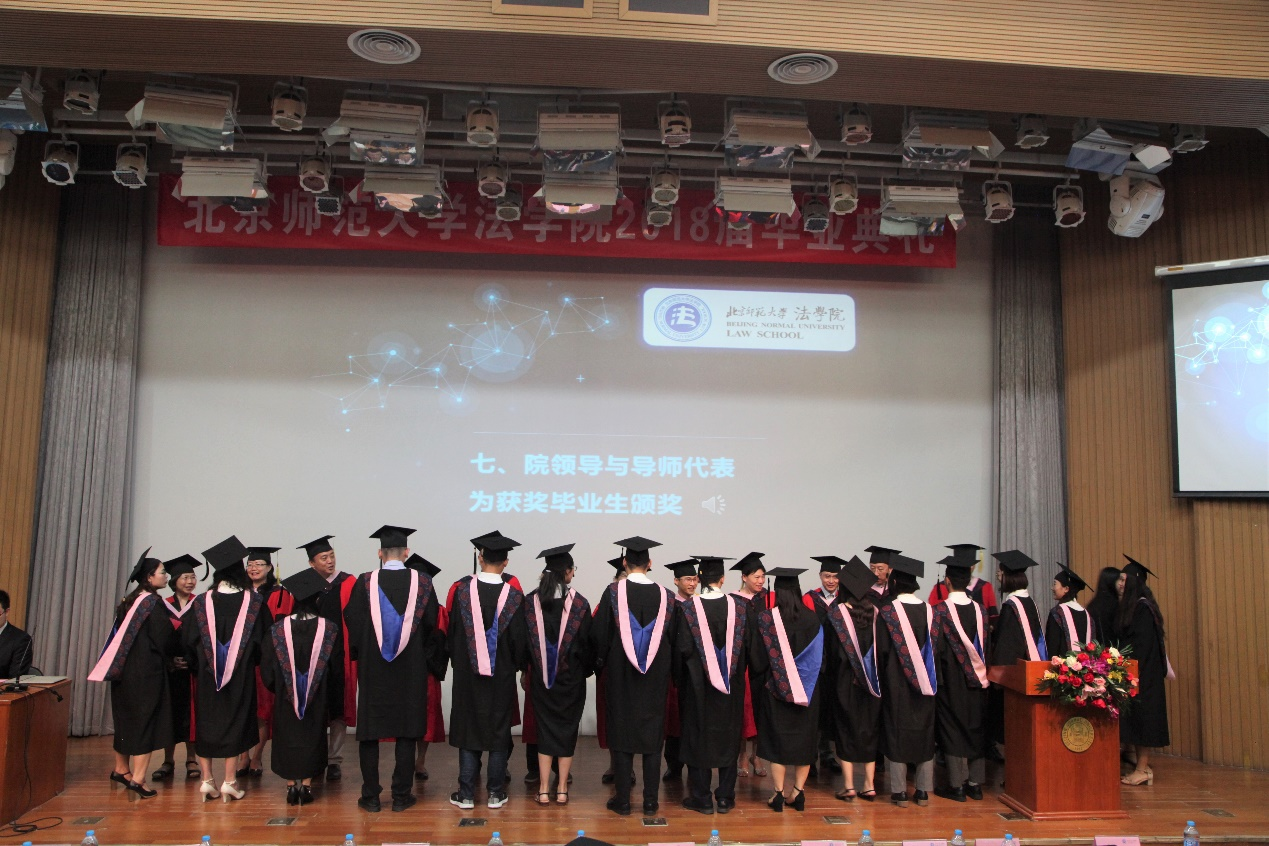 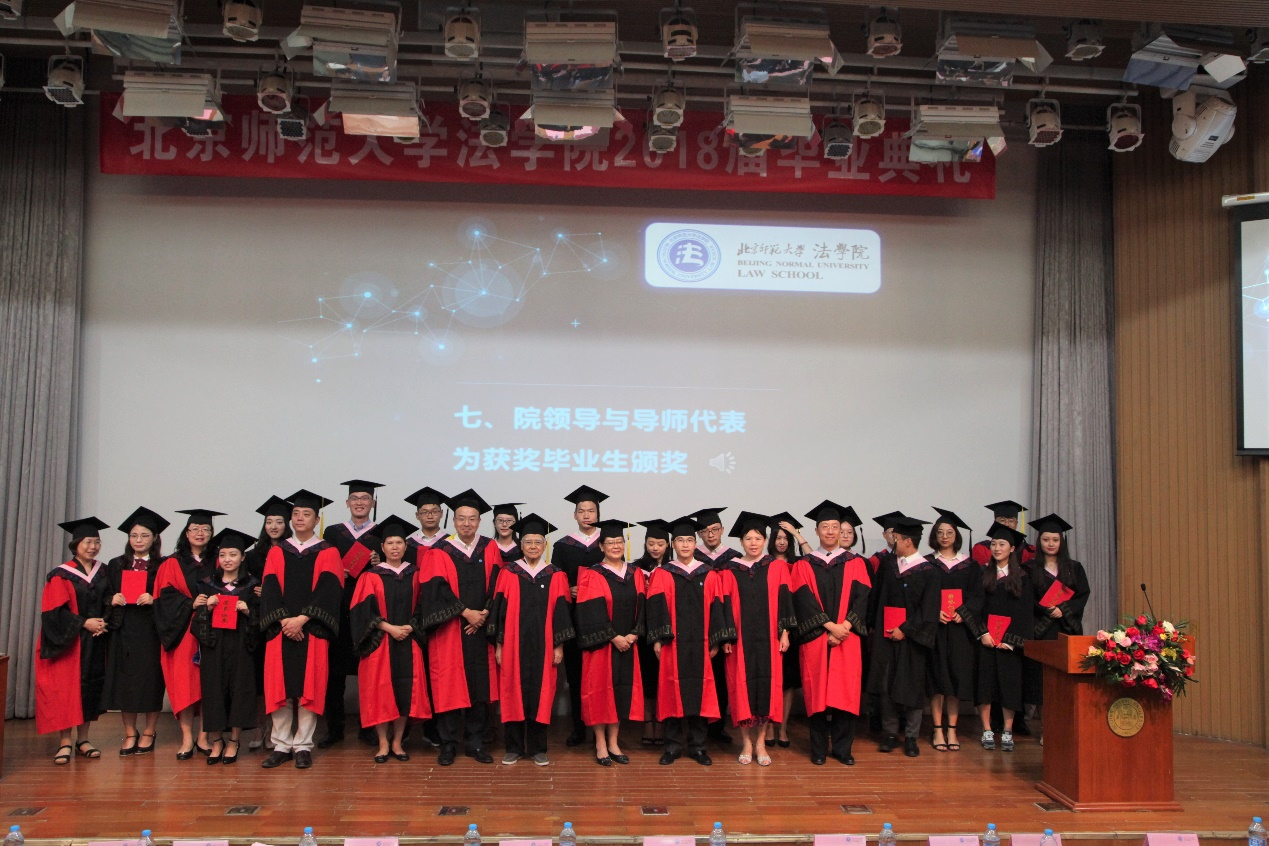 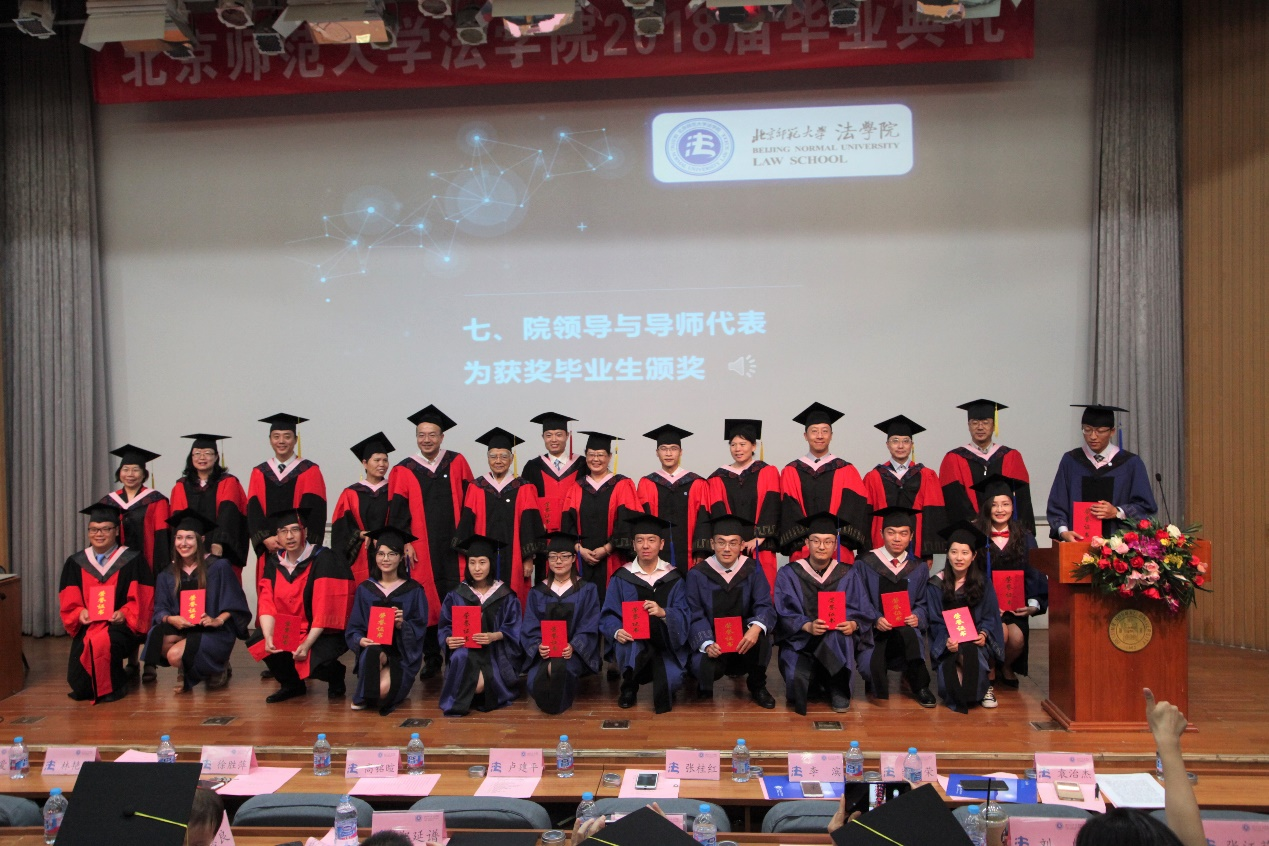 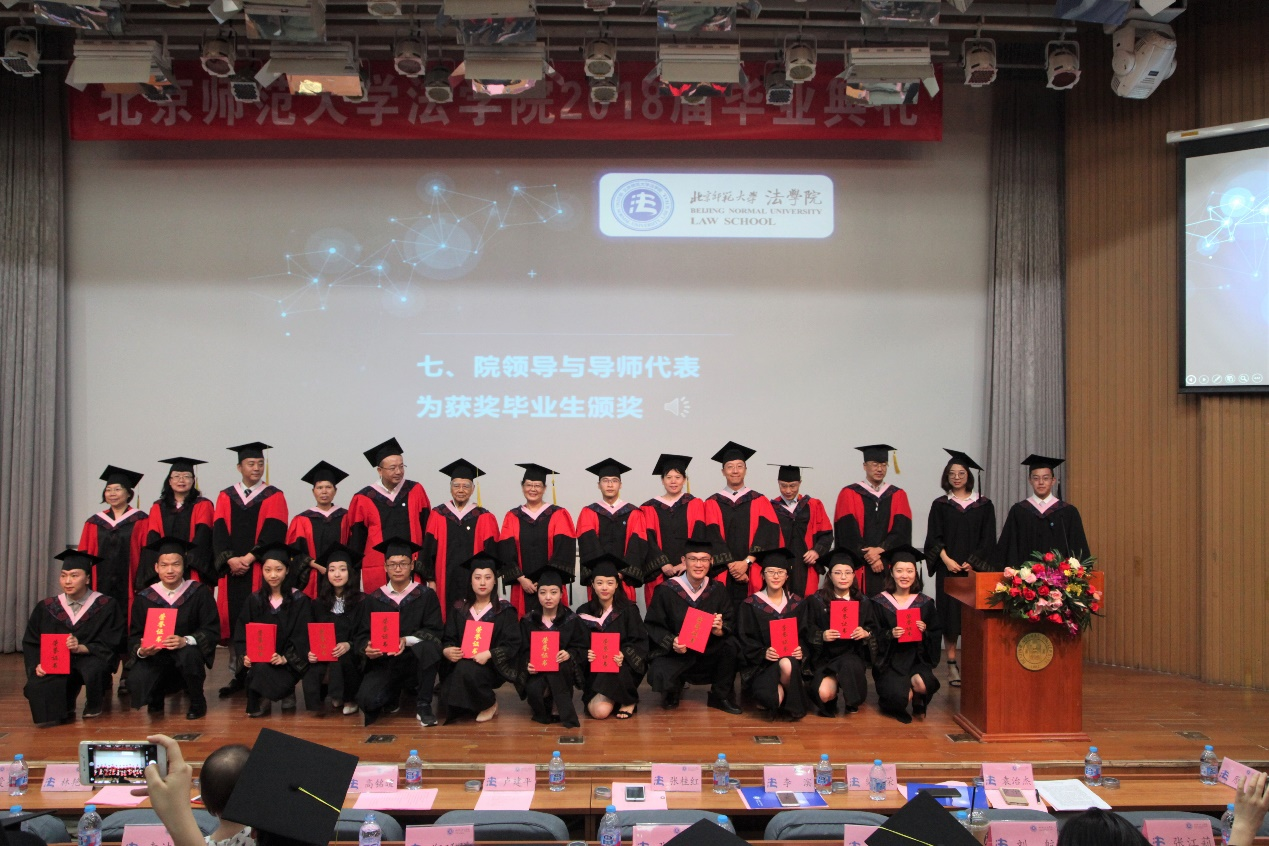 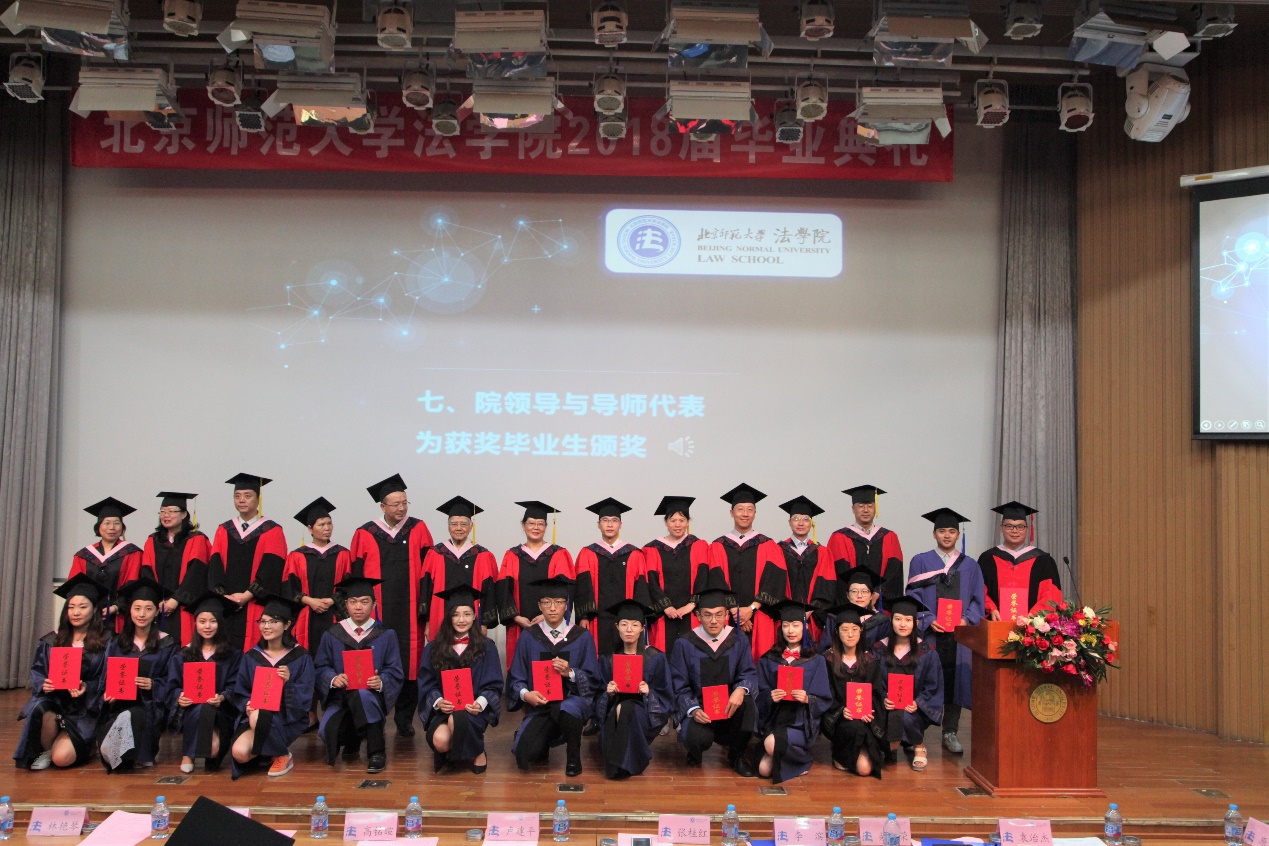 In 8th event of the conference, SU Yang made a speech on behalf of the graduates. 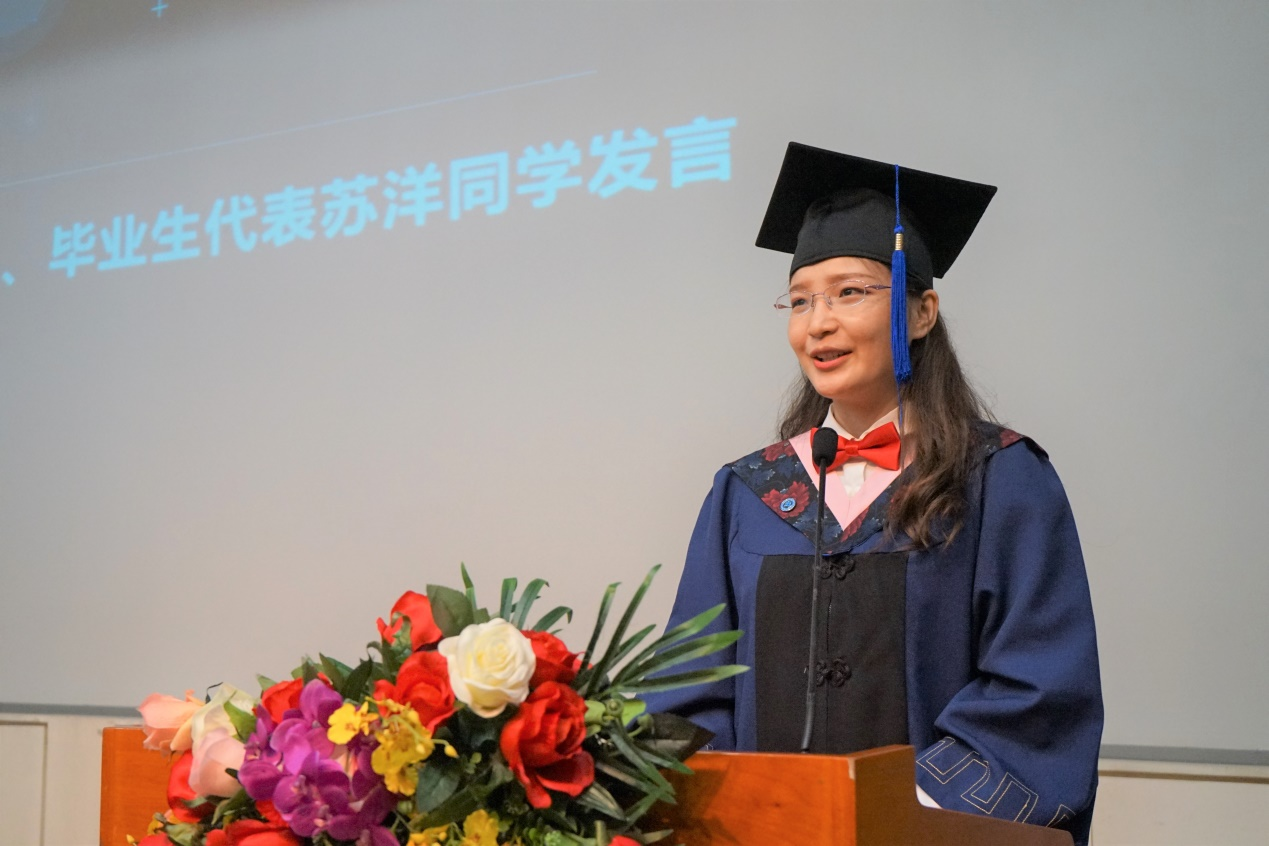 In 9th event of the conference, Notebaert Victoria Sophie, the representative of foreign student made a speech. 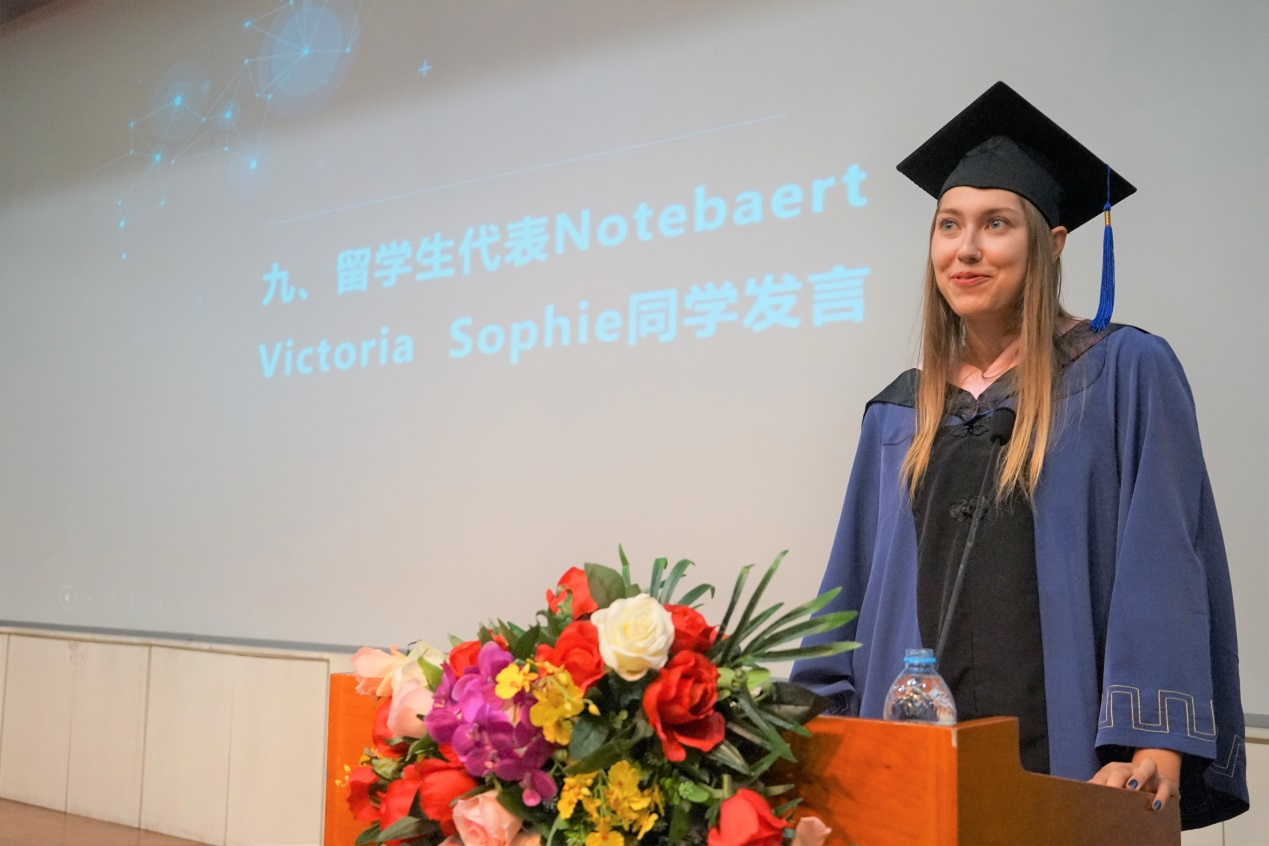 In the 10th event of the conference, Lawyer LI Ruixuan, the alumni representative as well as an undergraduate of 2013, made a speech. 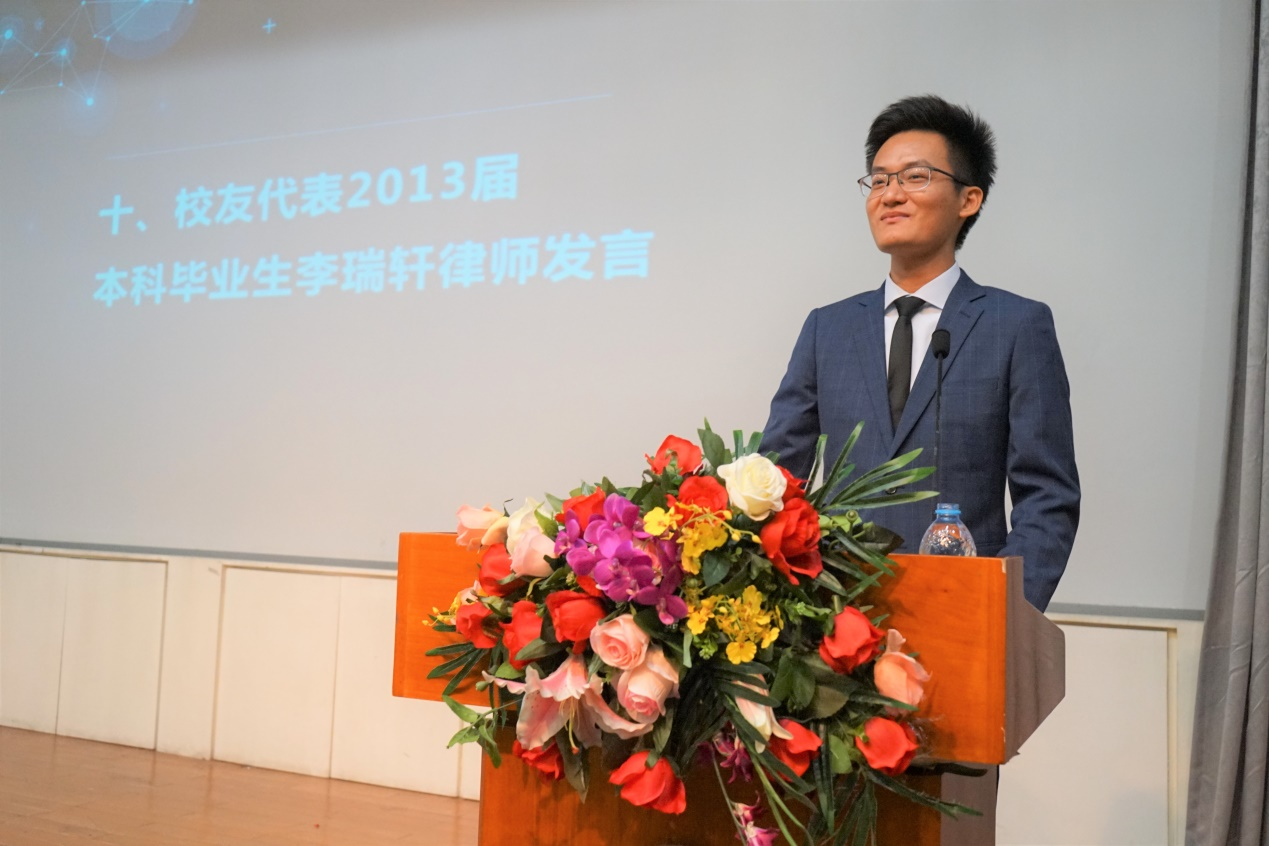 In 11th event of the conference, Teacher YAN Houfu, the teachers’ representative made a speech.

Teacher Yan's humorous opening received bursts of applause. Later, he earnestly said that the students of Beijing Normal University Law School should have a sense of responsibility as a citizen and a lawyer, and they should also have the ability to act rationally. Feelings were rare, but what really enabled us to accomplish things was professional ability and rational spirit. Teacher YAN then shared with us an example of a graduate present here giving his own opinion on the nuclear power plant under construction with his professional knowledge and ability, and urged the graduates present here to look at the problems and solve them with their professional ability and rational spirit, and strive to make conducive contributions. 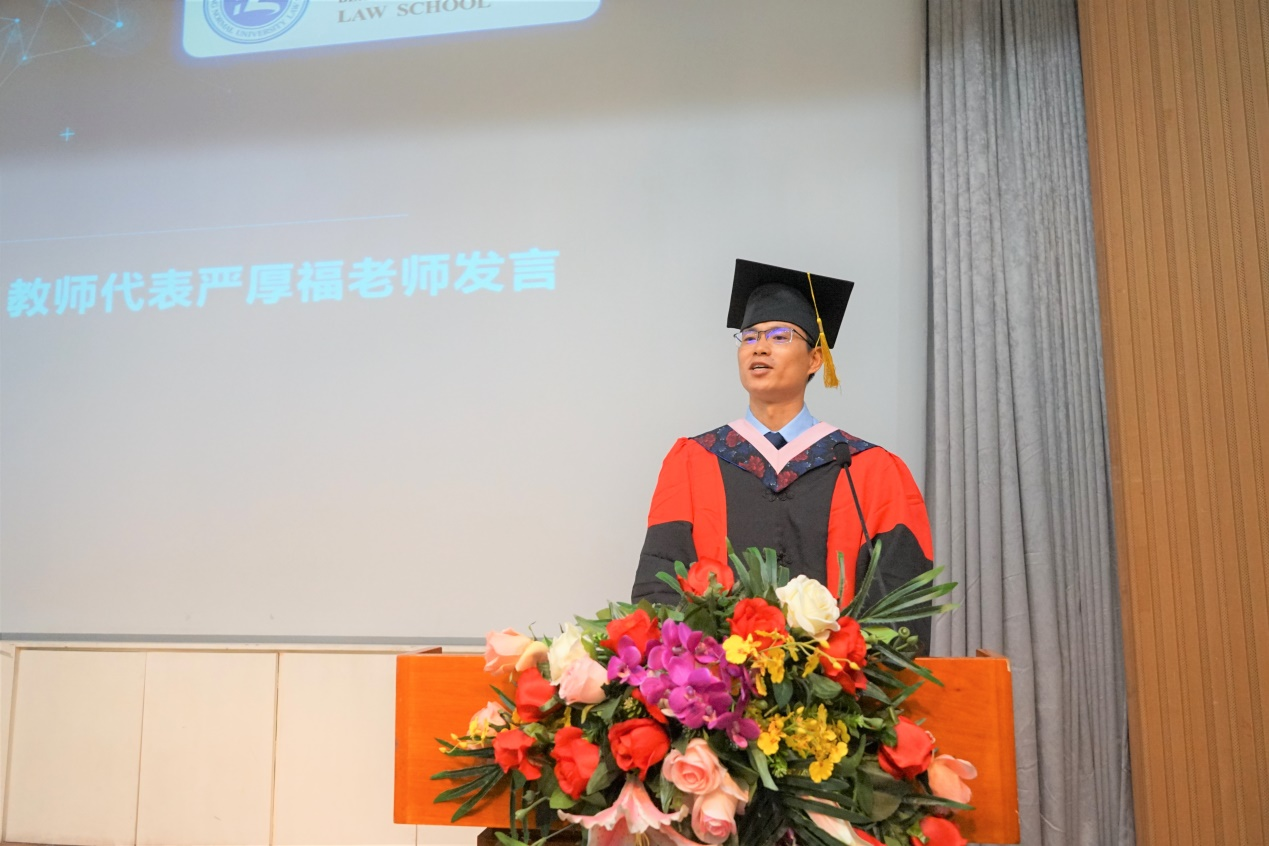 The 12th event of the conference was a message from Professor GAO Mingxuan, the honorary Dean of the College for Criminal Law Science.

Professor GAO Mingxuan first affirmed the great progress and outstanding achievements made by BNU Law School in recent years, and at the same time expressed his wishes and expectations for the future development of BNU Law School. He mentioned that graduation, a milestone in life, would mark his or her own life and form an important part of life. Professor GAO Mingxuan hoped that all graduates would continue to be optimistic and enterprising after graduation. They should contribute their own strength to society and the country as well as the world. Professor GAO Mingxuan's cordial greetings and sincere wishes not only arouse the graduates' deep nostalgia for their alma mater, but also encouraged them to use their professional knowledge to make contributions to the construction of the rule of law in the motherland in the future. 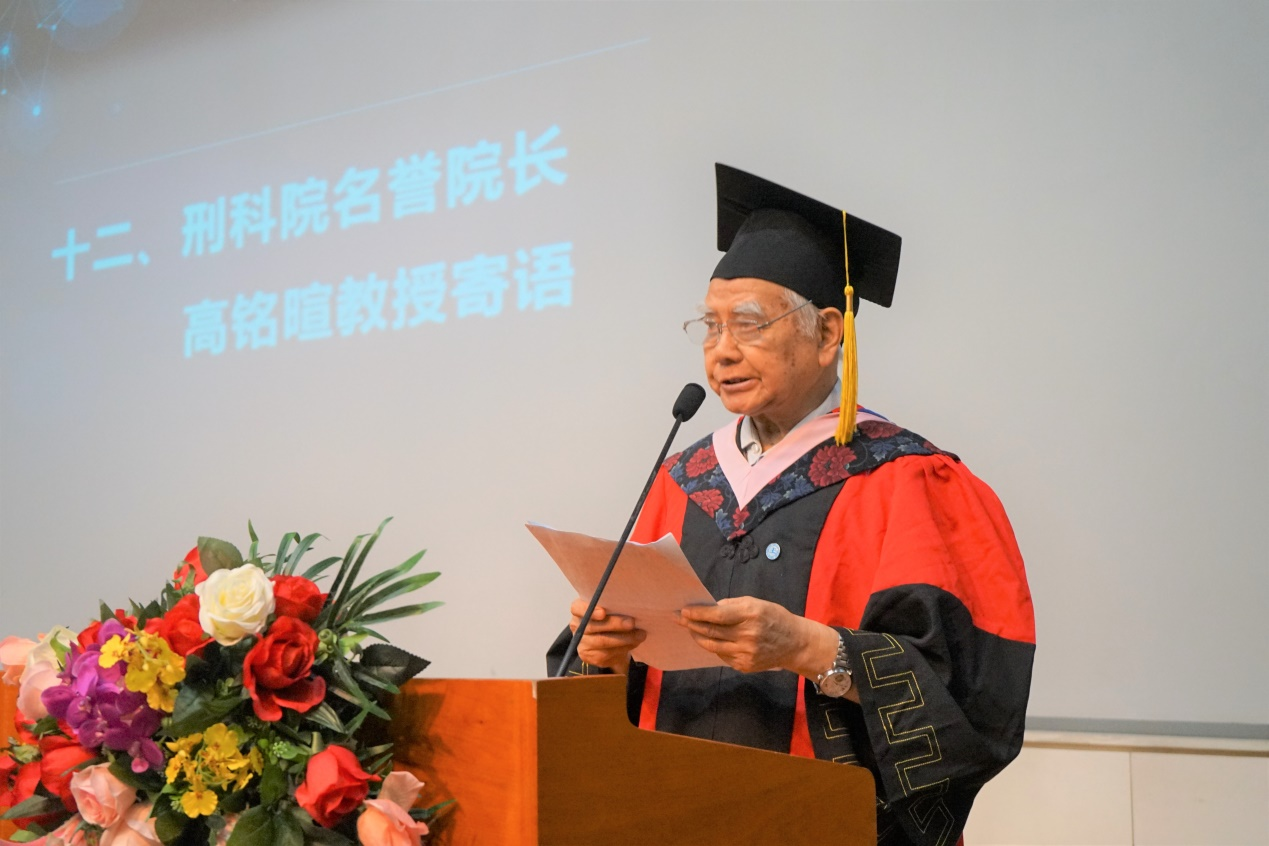 The 12th event of the conference also included the message from Dean LU Jianping.

Dean Lu won applause from the audience with his familiar smile as soon as he entered the stage and from his earnest exhortations and instructions about "alopecia". In his speech, he deeply explained the meaning of the college motto "moral education is for the best and law is for the world”. He quoted classics and cited examples of laws to emphasize once again that morality was always the first, and learning and using laws were the second. He meant that morality was higher than law. He hoped that the graduates of Beijing Normal University Law School would still be able not to forget initiative mind and illuminate the corners of the society with their words and deeds when conducting the social examinations. He even expected everyone to be positive, to practice both morality and law, and to strive for good law and sound governance. 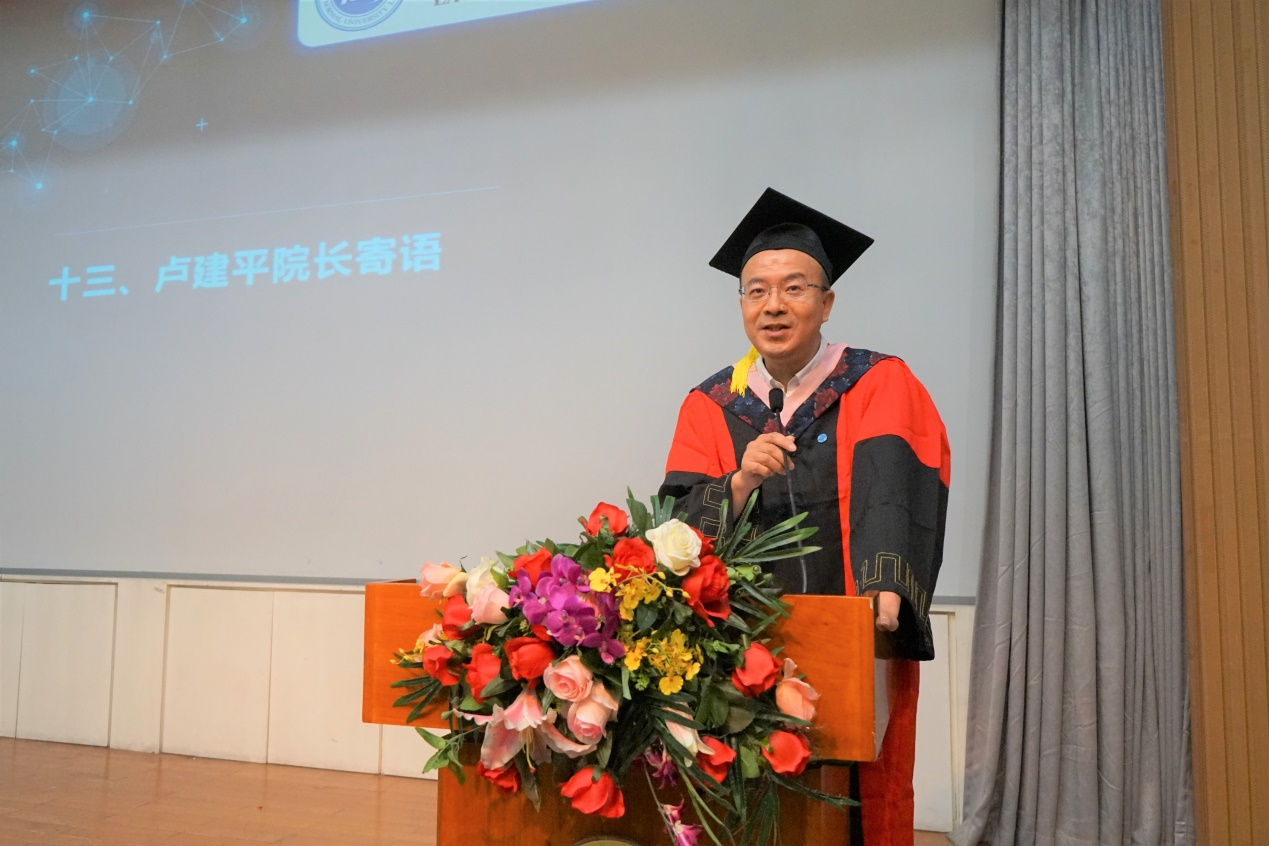 The 14th event of the conference was to sing the school song. 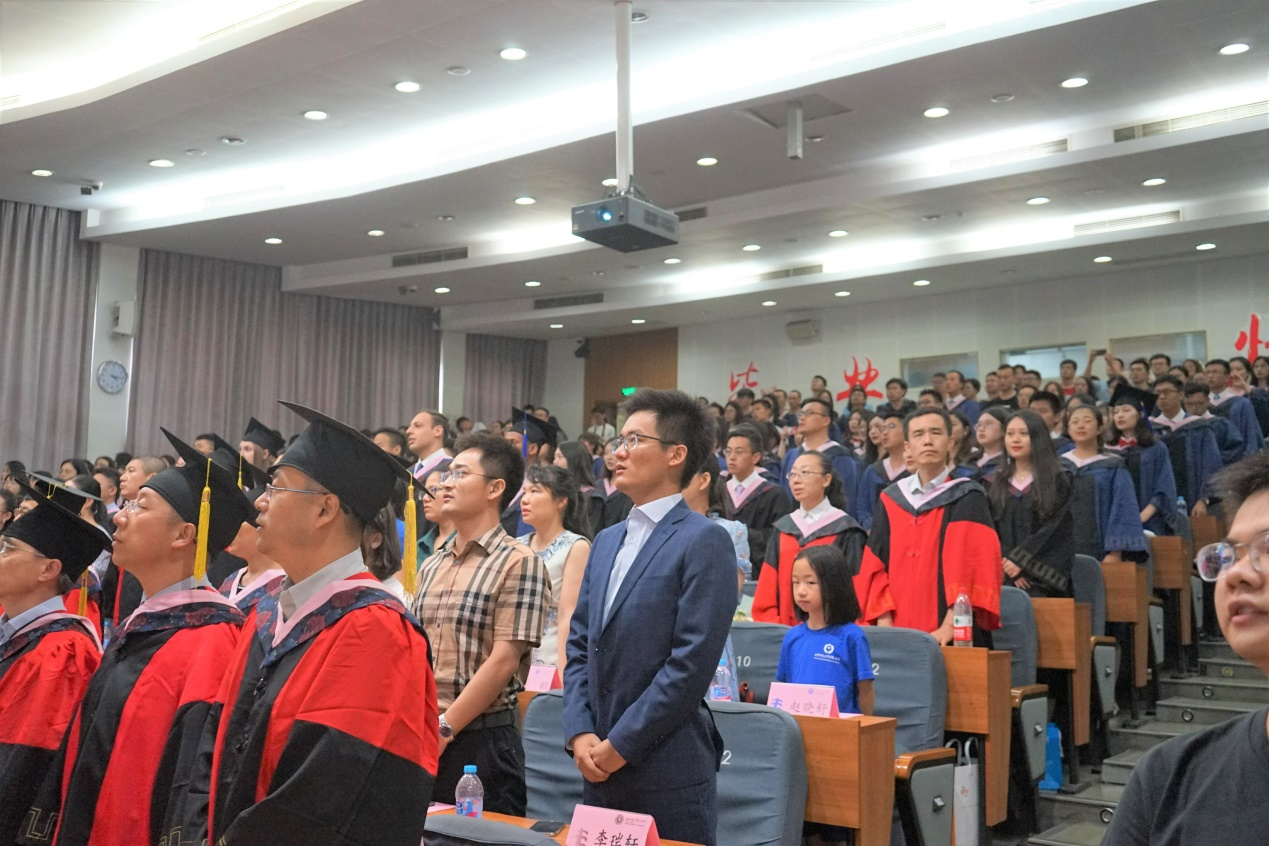 In the 15th event of the conference, all teachers and students read aloud the school motto and the college motto under the guidance of Teacher LIANG Yingxiu.

In the 16th event of the conference, graduation performance was conducted. 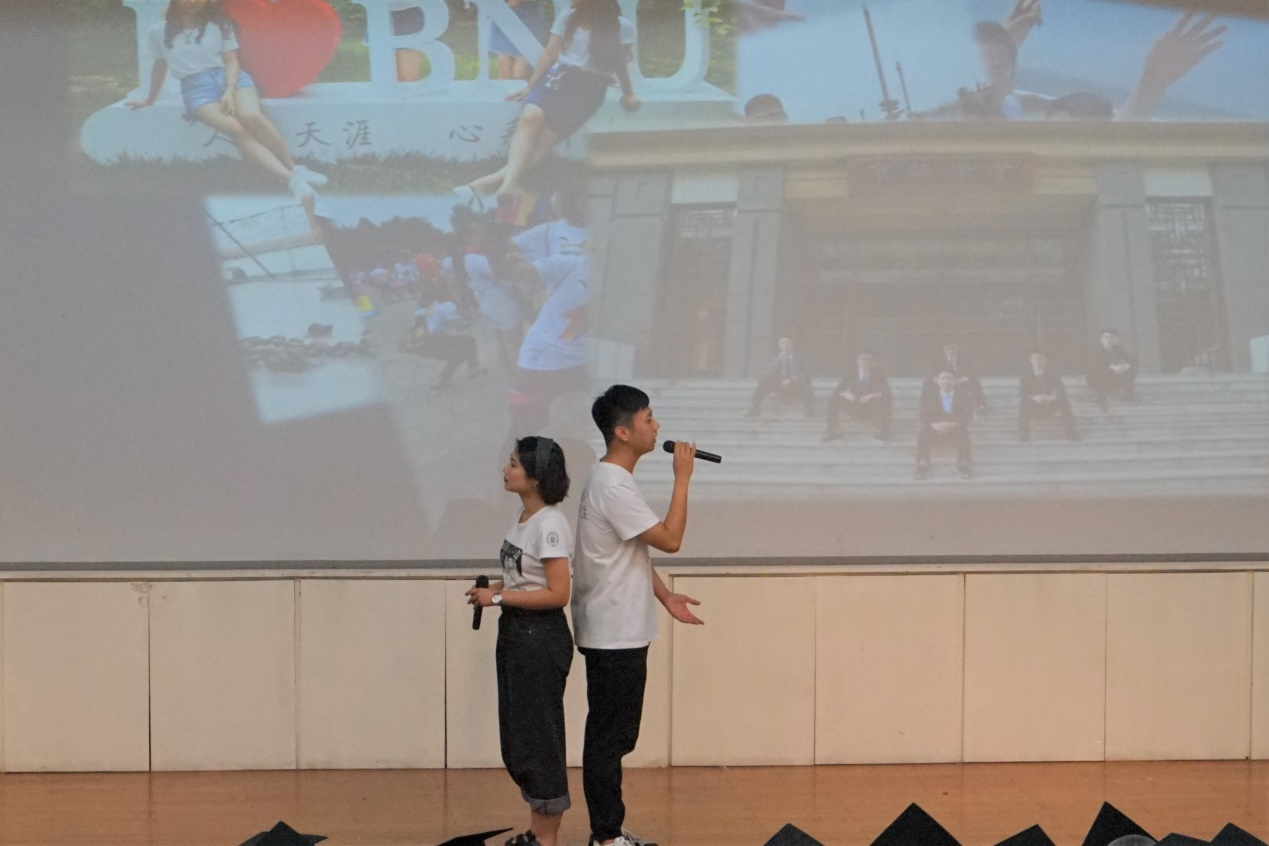 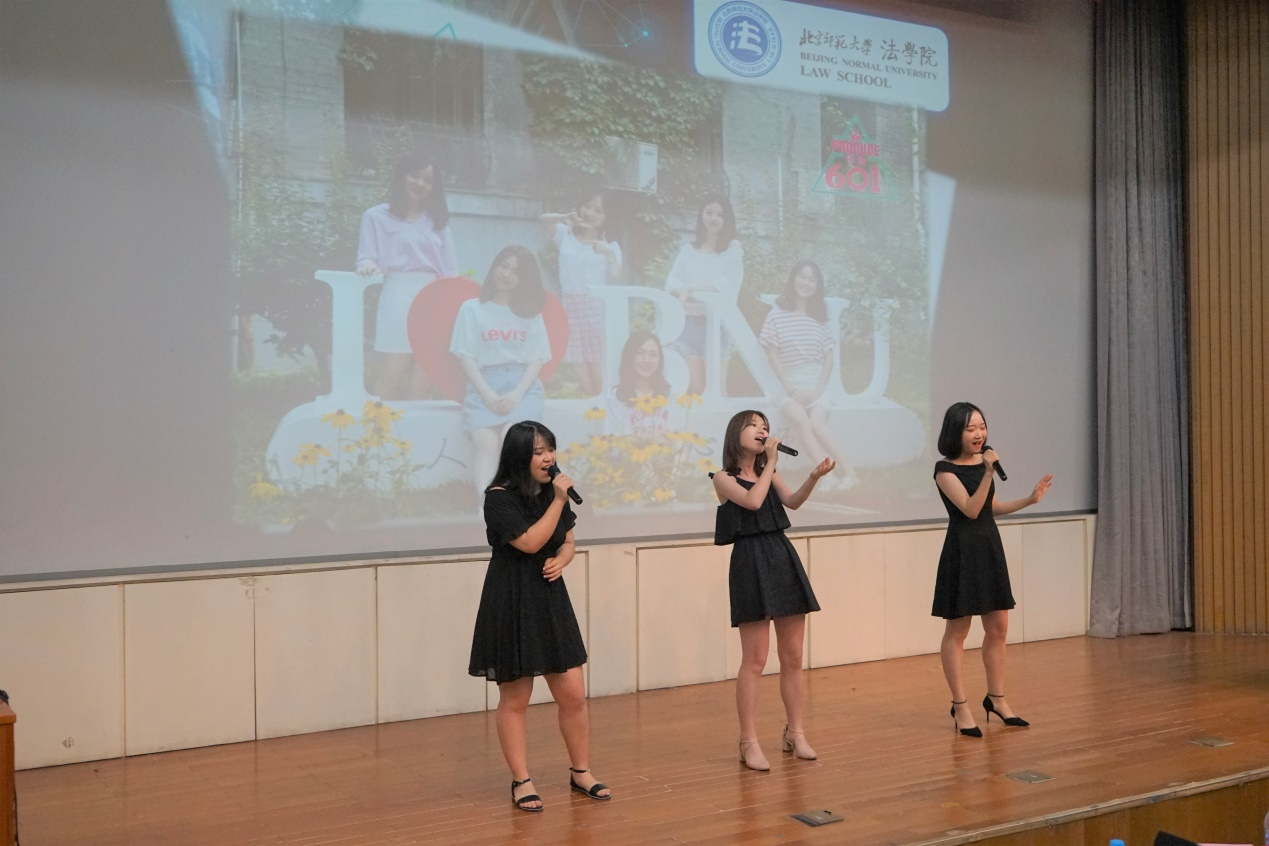 The farewell will be coming in one day, but

They will remember those regrets and satisfactions, those giving and receiving, and those loving and being loved.

They will remember the sentence "we spend all life pursuing justice and equity, but emotion also cannot be ignored".

They will remember that "moral education is for the best and law is for the world".

They will remember that Beijing Normal University Law School ... 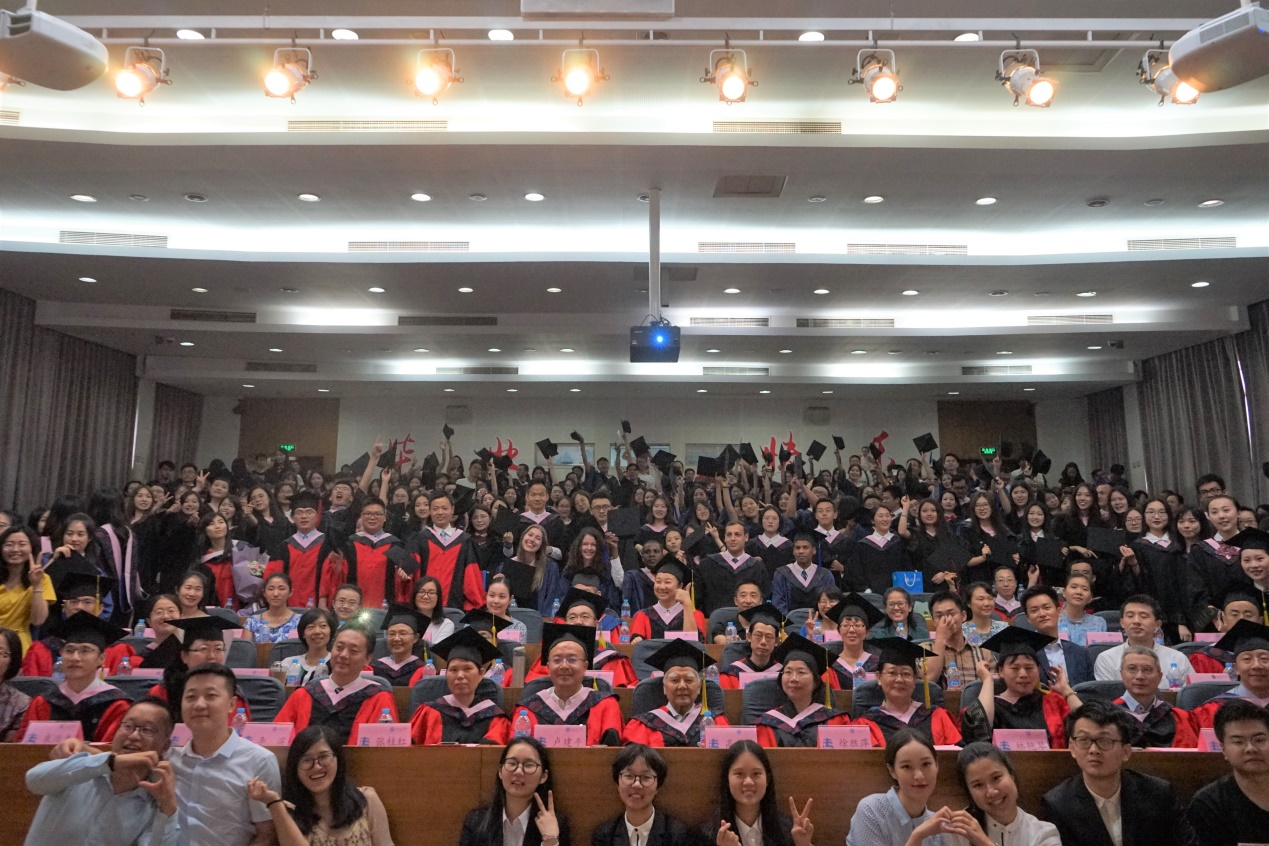 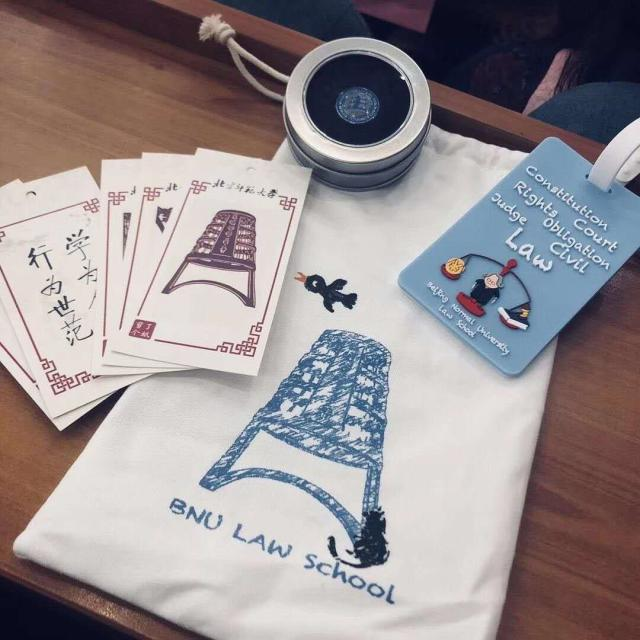 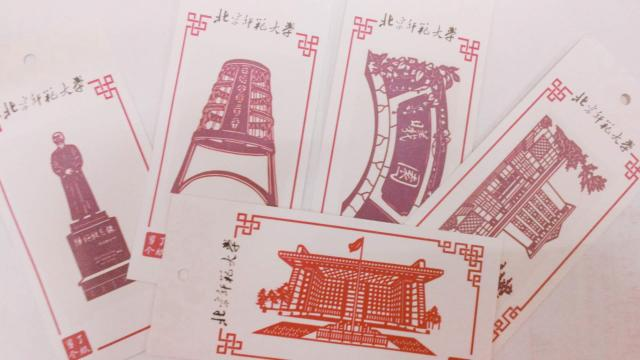 (The graduation souvenir bookmark was made by one of student entrepreneurship teams "cut a piece of paper". Thanks for their product design.)