﻿A hundred years journey is magnificent, and a hundred years initial heart lasts for a long time. We will create great achievements together, and we will never forget to set sail at first. In order to further strengthen the mission and responsibility of Party activists, effectively improve their ideological awareness and theoretical level, continue to play the role of Party organizations as fighting bastions and vanguard and exemplary role of Party members, and continue to deepen the study and education of Party history, the second-level Party School of Beijing Normal University Law School in the fall semester of 2021 and the junior league school in 2021–2022 held the July 1 special youth publicity activity of "Please rest assured, my Party, the strong country has me". 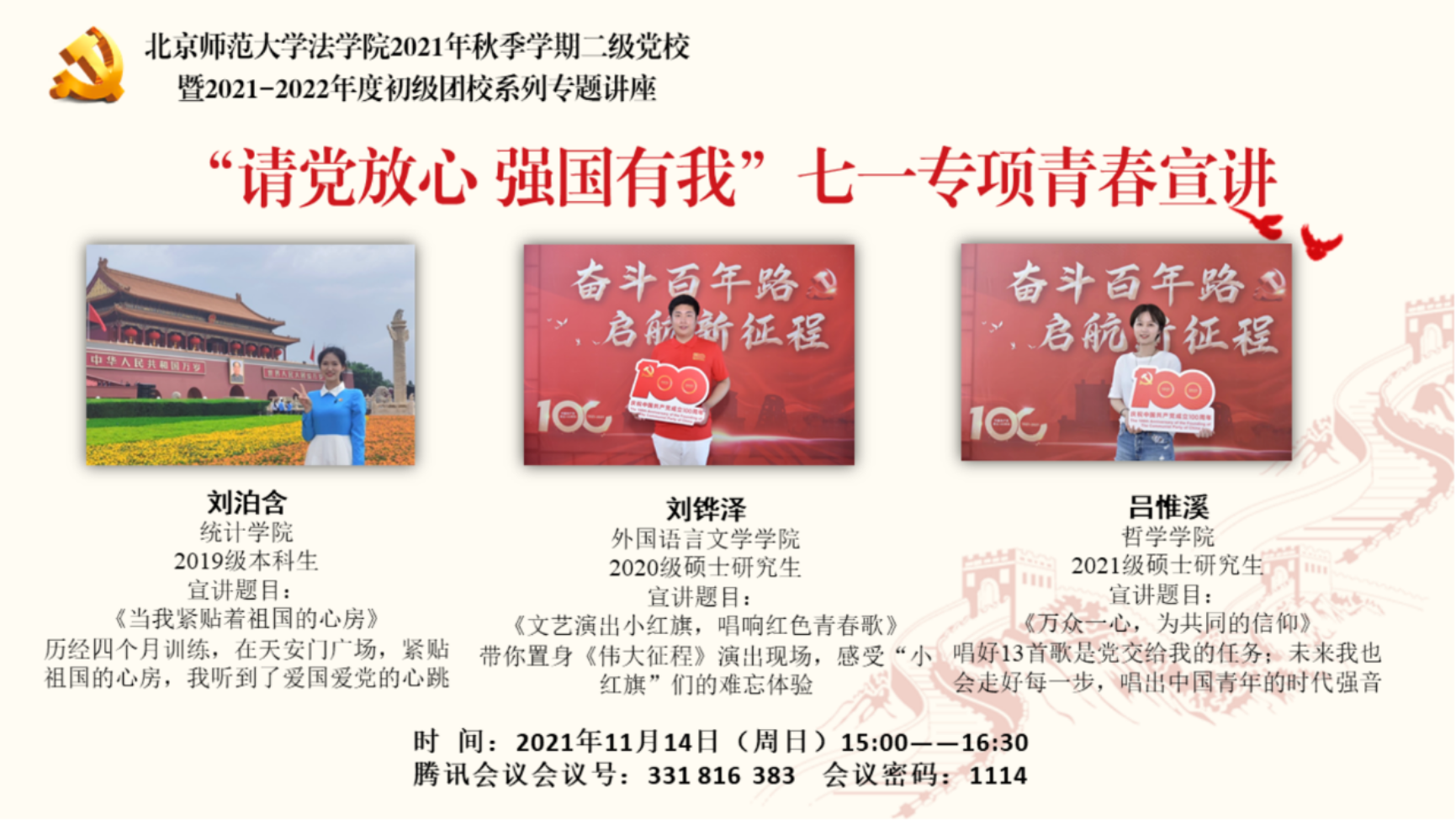 This activity specially invited three members, Liu Bohan, Liu Huaze and Lu Weixi, from the July 1 special youth propaganda group specially set up by the school youth league committee. Starting from their own experiences of deeply participating in the chorus of the General Assembly Square, the lyricist group and the chorus of Great Journey, an artistic performance celebrating the 100th anniversary of the founding of the Communist Party of China (CPC), respectively, they talked about their mission in the prosperous times, sang the strong voice of the times of Chinese youth, led the activists back to the performance site of Great Journey, fulfilled the mission of the youth of Beijing Normal University and offered youth blessings to the Party.

Ma Yimeng talked about passing on the grand event and sticking to the youth faith. Struggle for a hundred years, the journey is hard. As the youth of the new era, standing at the historical intersection of "two hundred years", facing the simultaneous interweaving and mutual stirring of China's best development period in modern times and the world's unprecedented changes in a hundred years, we are playing an important role. We should learn from history, keep the vitality of our thoughts, cultivate a strong sense of problems, promote thinking by learning, promote action by thinking, be a new generation with faith and responsibility, and sustain the vitality of young people.

Li Yijie said that after listening to this lecture, he really felt that, as young people of the new era, we, who paid tribute to our youth and made youth vows to the Party, were doing the same thing as our predecessors who held high the torch of Marxist thought a hundred years ago and were struggling to find the future of national rejuvenation in stormy China, but we had the beacon and guidance to follow. We praise the glory of heroes, we praise the centennial Party, and we also swear that in the new century, we will listen to the Party's words, feel the Party's kindness, follow the Party, unite with the Party and go far away.

Zhang Zixuan lamented that after listening to today's lecture, she realized how many people's efforts had been condensed in this huge commemorative activity. Epidemic prevention, confidentiality, intensive rehearsal and hasty graduation ceremony...This activity is full of youthful vitality and sense of responsibility and cohesion of young people. "The future belongs to the youth, and the hope is placed on the youth." Youth is the future of the country and the hope of the nation. As the youth of the new era, we should keep up with the pace of the Party, devote ourselves to the national construction and contribute to the development of the Party and the country.

In the July 1st speech, General Secretary Xi Jinping emphasized that Chinese youth in the new era should take the great rejuvenation of the Chinese nation as their own responsibility and enhance their ambition, backbone and confidence to be Chinese. Live up to the times, live up to the glory days, and live up to the ardent expectations of the Party and the people. The vast number of young people should shoulder the historical mission, strengthen their confidence in progress, aim high, be a great talent, and take on a great responsibility, and strive to be the new generation worthy of the important task of national rejuvenation, so that youth can bloom brilliantly in the unremitting struggle for the motherland, the nation and mankind. Red Normal School, passing on the torch, "Please rest assured that the Party and the powerful country have me" is not only a slogan, but also an idea that the students of Beijing Normal University have always practiced. We will always inherit and carry forward the great spirit of Party building, keep in mind the original mission, promise the Party to serve the country, live up to the people and contribute to the great rejuvenation of the Chinese nation!